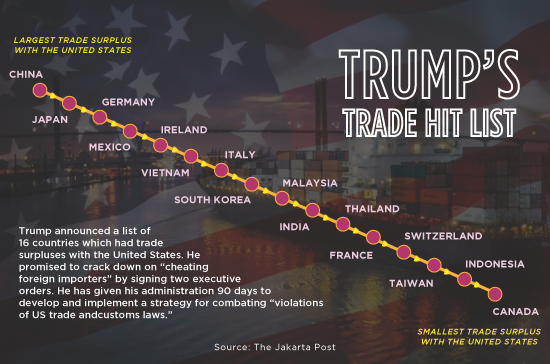 Indonesia is featured in Trump’s trade hit list
3 April 2017 – Indonesia is ranked 15th in a list of 16 countries Trump has put down on his “trade hit list”. The list contains 16 countries which have trade surpluses with the United States. Of the 16 countries, three are ASEAN countries – Indonesia, Malaysia and Thailand. Indonesia currently has a US$13 billion trade surplus with the world’s largest economy. Trump signed two executive orders which give his administration 90 days to, in his words, “implement a strategy for combating violations of US trade and customs laws” by “cheating foreign importers”. In response, Indonesian Trade Minister Enggartiasto Lukita said they would closely monitor the situation.

ASEAN and Russia discuss strengthening ties
30 March 2017 – The 14th ASEAN-Russia Senior Officials Meeting was held in Vientiane, Lao PDR, with senior officials discussing ways to speed up the implementation of the partnership contained in three ASEAN-Russia framework documents; the Sochi Declaration, ASEAN-Russia Comprehensive Plan of Action 2016-2020, and a report by the ASEAN-Russia Eminent Persons Group. Russia was open to increasing collaboration in the areas of science, technology and innovation, health, education, agriculture and food security, energy, transport, tourism and disaster risk reduction. Additionally, senior officials discussed cooperation in areas of combating terrorism and violent extremism, transnational crime, non-traditional security threats and cyber security. Finally, on economic cooperation, both sides agreed on the importance of involving the business sectors through trade missions and fairs.

ASEAN PMI increased to 50.9
French President Francois Hollande pledged US$ 2.6 billion of investments in the areas of energy, infrastructure and retail to Indonesia on his visit to the country this week. President Joko “Jokowi” Widodo and his French counterpart also witnessed the signing of five memorandums of understanding covering defense, sustainable urban development, research, technology and tourism, and also agreed to increase cooperation on maritime issues, fisheries and creative industries such as film and fashion. Jokowi also expressed gratitude that the French government had not proceeded with a plan to nearly triple a tax on palm oil to 300 euros (US$327) a ton.

Cambodia and Thailand strengthen military ties with China
Bank of Thailand’s monetary policy committee members unanimously voted to maintain the one-day bond repurchase rate at a near record low level of 1.5 percent. BoT pursued this plan despite calls from the IMF to reduce rates and inject a fiscal stimulus into the economy in order to support growth. The IMF’s recommendation comes as Thailand’s growth rate is lagging behind that of its ASEAN neighbours. However, BoT is confident that despite the unchanged rates the Thai economy will grow this and next year.

Businesses disappointed with slow reforms
6 April 2017 – Businesses are disappointed that the government led reforms have not kept pace with private-sector led growth in the country. Corporate leaders are concerned that the economy is not the priority of the current government. Companies will have to continue to deal with issues such a power cuts as the government has yet to sign a deal for two large power projects which it conducted tenders for last year. Infrastructure projects in areas of transport, water and roads are also seeing slow progress. Business executives are also concerned about the small scale reforms which are lagging – things that would make doing business easier such as the ease of making bank payments, agreeing on long-term property leases, paying taxes and employing people.

UK looks to negotiate trade pact with Philippines and ASEAN after Brexit
4 April 2017 – The United Kingdom will be looking to negotiate trade deals with ASEAN or individually with its 10 member states once it has left the European Union. UK Secretary of State for International Trade Liam Fox said that UK will take an outward looking stance and champion global free trade because it provides the best solution to tackling global poverty. According to Fox, Southeast Asia offers “enormous economic opportunities”. The UK is the third largest foreign investor in the Philippines.

Indonesia sets up unit for bilateral ties within ASEAN
3 April 2017 – The Indonesian Foreign Ministry will be establishing a dedicated unit for Southeast Asian affairs. The new unit will be responsible for taking care of bilateral ties with 10 ASEAN member states as well as Timor Leste, Palau and the Marshall Islands.

New tax plan may reverse outflow of foreign funds
6 April 2017 – Philippines is the only emerging Asian nation that has seen outflows of foreign funds. However, this could be reversed if President Duterte’s promised tax reforms are implemented. The tax reforms have to be passed by Congress first, and this may be delayed. The plan aims to raise levies on fuel and cars while cutting income taxes and is estimated to raise US$3.2 billion a year. This will bring back back global asset managers, who have disposed US$230 million of Manila-listed equities in 2017. In contrast these asset managers have invested US$6.7 billion into India and US$1.4 billion into Malaysia.

Concerns over Singapore-India trade pact
5 April 2017 – The Indian Ministry of Commerce and Industry dispelled a rumour which indicated that Singapore’s foreign employment policies may be a concern to India as they begin a review of the bilateral free trade agreement between the two countries. However, the Ministry stated that a pre-planned review of the Comprehensive Economic Cooperation Agreement (CECA) will continue to go ahead while the agreement stays in force. The Singapore-India CECA covers such areas as tariff concessions and the facilitation of movement of professionals was concluded in 2005. The concern raised was over restrictions placed by Singapore on visas for IT professionals from India. The Indian representative from the Ministry also stated that recent policy measures by Singapore that do not respect, the provision within CECA, of movement of natural persons are a cause of concern and are being discussed with the government of Singapore.

Malaysia and Thailand sign MoU for better supervision and coordination of banks
6 April 2017 – Malaysia’s Bank Negara Governor Datuk Muhammad Ibrahim and Bank of Thailand Governor Veerathai Santiprabhob signed a memorandum of understanding which will enhance the supervision of banks operating in both countries and improve coordination in key areas such as sustainable financial development. Both parties stated that the MoU will also help further development of effective supervisory systems in accordance with principles set out in the Basel Core Principles for Effective Banking Supervision.