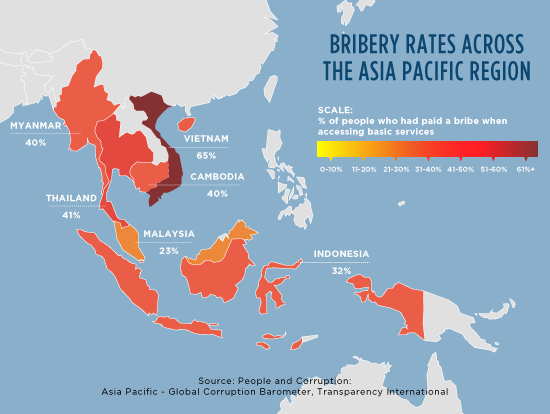 Corruption continues to plague ASEAN nations
Transparency International came out with its latest report on corruption and bribery in Asia Pacific. Six of the ten ASEAN nations were featured in the report namely Cambodia, Malaysia, Myanmar, Indonesia, Thailand and Vietnam. The report was based on a survey conducted of approximately 22,000 people in 16 countries, regions and territories across the Asia Pacific between July 2015 to January 2017. Participants were asked about their perceptions and experiences of corruption. Those in Vietnam experienced high levels of corruption with almost 65 percent having paid a bribe to access basic services. While 65 percent of those surveyed in Indonesia felt that corruption has risen in Indonesia.
Source: Transparency International (7 March 2017)

90 percent of products to have tariff cuts for RCEP
ASEAN nations are sticking to their promise to cut import tariffs on 90 percent of products, this will include between 5000 to 6000 items under the Regional Comprehensive Economic Partnership over the next 15 years. Thai Commerce Minister Apiradi Tantraporn said that ASEAN will discuss this with the six other members of this pact. He also added that the plan was to sign this pact during the ASEAN Summit in November of this year.
Source: Bangkok Post (14 March 2017)

EU-ASEAN may resume FTA negotiations
During the 15th ASEAN Economic Ministers – European Union Trade Commissioners Consultations last week it was decided that both regions would work towards reviving stalled negotiations. The negotiations on the ASEAN-EU trade agreement began in 2007 but were abandoned in 2009 due to differences over ambitions for the plan. In a joint press statement officials from both regions stated that such a decision was crucial especially in the current global economic and geopolitical situation where protectionism is on the rise and seen as the way to prevent loss of jobs due to automation and industrialisation. Bilateral trade between the regions stood at US$220.5 billion in 2016. The EU was the largest external source of foreign direct investment into ASEAN in 2015, at US$24.7 billion.
Source: Bangkok Post (10 March 2017)
Source: ASEAN Secretariat (10 March 2017)

Singapore’s growth figures to be higher than expected
Economists are projecting Singapore’s growth to be at 2.3 percent, up from the forecast released by the central bank of 1.5 percent. The survey of economists was conducted by the Monetary Authority of Singapore. This bump up in the forecast is due to the unexpected year-on-year growth rate of 2.9 percent which was bolstered by strong growth in the last three months of 2016 in manufacturing sector. The sector experienced an 11.5 percent year-on-year jump in growth.
Source: CNBC (15 March 2017)

Indonesia’s growth in export and imports slowed down
Data released by the statistics bureau in Indonesia showed that the country’s exports and imports grew at a slower rate in February 2017 compared to January 2017. Shipments from Indonesia rose 11.16 percent to US$12.57 billion. Imports rose at 10.61 percent in February 2017 compared to February 2016 to US$11.26 billion. They country’s trade surplus for February stood at US$1.31 billion, down from the US$1.43 billion recorded in January of this year.
Source: CNBC (14 March 2017)

China-Malaysia industrial park sees billions in investment
The China-Malaysia Qinzhou Industrial Park (CMQIP) has seen a total investment of US$4.3 billion for 50 projects. The park is a unique government-to-government project which means that both countries are incentivised to look for investors. The administrative committee for the park said that 73 percent of land reserved for industries in the area had already been taken up. CMQIP is developed by a joint venture between Qinzhou Develop­ment (M) Sdn Bhd (led by SP Setia Sdn Bhd and Rimbunan Hijau Group) and China’s Qinzhou Jingu Investment Co Ltd.
Source: The Star (14 March 2017)

Changes to Philippines’ top diplomat
President Duterte promoted Foreign Affairs Undersecretary for Policy Enrique Manalo to the country’s Secretary of Department of Foreign Affairs. This comes after a congressional committee rejected Perfecto Yasay for the position due to his conflicting statements about his citizenship. Yasay formerly practiced law in the United States and was issued U.S. citizenship in 1986 but it became void as he did not take up residency in the country. Thus far acting as the country’s top diplomat Yasay has attended the Asia-Europe Summit in Mongolia, Association of Southeast Asian Nations meetings in Laos and accompanied Duterte on state visits to China and Japan.
Source: Nikkei Asia Review (9 March 2017)

ASEAN should use collective strength says Australian Foreign Minister
On a two day visit to Singapore, Australian Foreign Minister Julie Bishop reminded ASEAN to not underestimate the moral force that it can collectively exert to get other countries to adhere to a rules-based system. She added that ASEAN has the opportunity to lead with a combined GDP of US$3.5 trillion. Bishop also said that the U.S. must play a greater role in keeping peace within the region especially in light of issues in the South China Sea (SCS) area. Australia maintains that it will not take sides in the SCS dispute but has called upon a system that abides by the rule-of-law to be adopted.
Source: The Straits Times (14 March 2017)

Singapore hands over SMVTI to Myanmar
On a three day visit to Myanmar, Singapore’s Emeritus Senior Minister Goh Chok Tong, oversaw the signing of an agreement to handover of the Singapore-Myanmar Vocational Training Institute (SMVTI) to Myanmar over the next three years. Myanmar will take over the funding of SMTVI and Singapore will continue to provide technical and management skills so the operations eventually become independent. Approximately 700 students have graduated from SMTVI so far and some are doing their internships in Singapore. Goh called upon President Htin Kyaw who was grateful for Singapore’s steadfast friendship. Singapore is the second largest investor in Myanmar, after China, with a cumulative US$15.7 billion worth of investments as of December 2016.
Source: The Straits Times (16 March 2017)