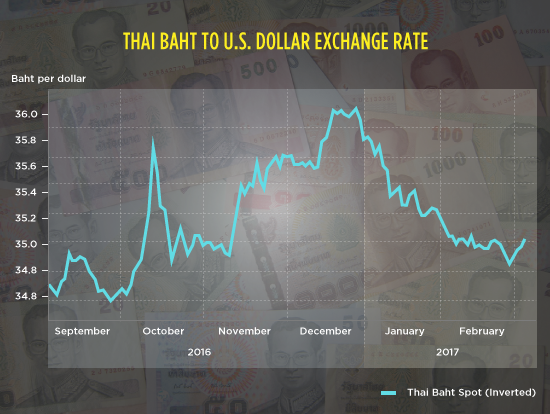 Strength of Thai baht proves to be a challenge for central bank
In comparison to all its ASEAN peers Thailand’s currency is seen as a ‘safe haven’ and Thai bonds have gained popularity among investors. Approximately US$2.1 billion has been invested in Thai bonds this year, the largest amount in Southeast Asia’s markets. This has led to speculation that the baht will cope well with an expected increase in the U.S. interest rates. Thailand is an export-oriented economy and a strong baht may affect the country’s exports. With growth slowing down in the past two quarters experts say that the Bank of Thailand may intervene in the markets in order to mitigate the downside of a strong currency.
Source: Bloomberg (6 March 2017)

Economic ministers and trade officials meet in Manila
The Senior Economic Officials Meeting (SEOM) was held on 8 March in Manila where leaders of 10 ASEAN countries gathered for the 23rd ASEAN Economic Ministers (AEM) Retreat. During the SEOM, the senior trade officials finalised the agenda for the AEM Retreat which was held on 9 March. The agenda included increasing trade and investment, integrating micro, small, and medium enterprises into the global value chain, and creating an innovation-driven business environment in the region. On 10 March, the delegates will be meeting with a high-level delegation from the European Union, led by its Trade Commissioner Cecilia Malmstrom for the 15th AEM-EU Trade Commissioner Consultations.
Source: MSN Money (6 March 2017)

No joint patrols of South China Sea says Australia
At a summit meeting of the Indian Ocean Rim Association, Australian Prime Minister Malcolm Turnbull said that there were no plans for Australia and Indonesia to conduct joint patrols of the South China Sea. This comes after Indonesian President Joko Widodo said in an interview last month that he would like to see joint patrols in the area as long as it did not fuel tensions with China. After a meeting between Indonesia’s Coordinating Minister for Maritime Affairs Luhut Pandjaitan and Australian Foreign Minister Julie Bishop both countries concluded that they could cooperate in other areas.
Source: Reuters (6 March 2017)

ASEAN-EU Joint Cooperation Committee Meeting in Jakarta
The ASEAN-EU Joint Cooperation Committee Meeting in Jakarta took place on 2 March 2017. The delegations discussed strengthening of the strategic partnership between the two regions. Discussions covered political-security, economic and socio-cultural issues. Both ASEAN and EU delegated welcomed the start of the negotiations and the progress on the ASEAN-EU Comprehensive Air Transport Agreement which aims to strengthen air connectivity to the benefit of both regions. The delegation also discussed the increase in EU funding for development cooperation projects from €70 million (US$ 74 million) to €196 million (US$ 207 million) in the period 2014-2020, to aid ASEAN integration.

South Korea diverts investments away from China to ASEAN
China’s ban on package tours to South Korea may cause a decrease in the latter’s GDP by 0.2 percent. This ban on tourism is among many other non-tariff barriers that China imposes on South Korea. In a move to decrease its dependence on China’s economy South Korea has begun to increase its foreign direct investment in Southeast Asia. Currently, total stock of South Korean FDI in China is approximately US$52 billion while its FDI in ASEAN is US$45 billion.
Source: Bloomberg (8 March 2017)

Possible increase in new listed products across ASEAN capital markets
MSCI, a leading index provider, has introduced new ASEAN tradable indices which ASEAN Exchanges chairman, Tito Sulistio, believes will lead to new listed products across the ASEAN exchanges. At the 26th chief executive officers (CEOs) meeting in Bali, Indonesia, he also said that the Asean Exchanges will continue to work to build greater liquidity among members in the region through harmonisation of regulatory frameworks, facilitation of the issuance of Asean products, cross-exchange listing of Asean products and mutual recognition of capital market professionals.
Source: The Star (8 March 2017)

Thailand to become food hub with help of Jetro
The Japan External Trade Organization (Jetro) is reinforcing its collaboration with Thailand’s state-owned National Food Institute to turn Thailand into a food processing hub for the region and beyond. Jetro said that the two countries will facilitate this through consultancy, increasing information resources, business matching and business expansion services among Japanese and Thai food entrepreneurs. The director of the Jetro Bangkok Office said the aim is to encourage Thailand to become a key processed food manufacturing base for exports to other ASEAN countries, India and the Middle East.
Source: Bangkok Post (9 March 2017)

China promises to increase ties with ASEAN
On the sidelines of the National People’s Congress, Chinese Foreign Minister Wang Yi said that China is willing to work with ASEAN to increase cooperation and connectivity for mutual benefit. He also said that China will ensure that the Chinese will benefit from the China-ASEAN Free Trade Agreement and that they aim to conclude the Regional Comprehensive Economic Partnership as soon as possible.
Source: China Daily (8 March 2017)

Malaysia’s new railway set to develop east coast states
Malaysia unveiled its proposed alignment for its East Coast Rail Link (ECRL), a new railway that will connect its east coast states to the area in and around the capital city of Kuala Lumpur. Prime Minister Najib Razak said that the railway was a “game changer” because it would close the development gap between the country’s east and west coast. The Prime Minister also added that project aims to turn the east coast of peninsular Malaysia into a trade hub and tourism destination, as well as stimulate small and medium enterprises and new investments. He also defended the involvement of other countries such as China in the project, saying that it would not affect Malaysia’s sovereignty and “should not be politicised”.
Source: Channel News Asia (9 March 2017)

Controversial law to be signed-off in King’s absence
Cambodia’s constitutional council declared a controversial law as constitutional. The law will be signed off on by Senate President and member of the Cambodian People’s Party (CPP), Say Chhum as is the practice for when the Cambodian King is absent. King Norodom Sihamoni is on a trip to China for a medical checkup. The amendments to the Law on Political Parties gives the CPP-controlled government and the courts broad powers to suspend and dissolve political parties.
Source: Cambodia Daily (6 March 2017)