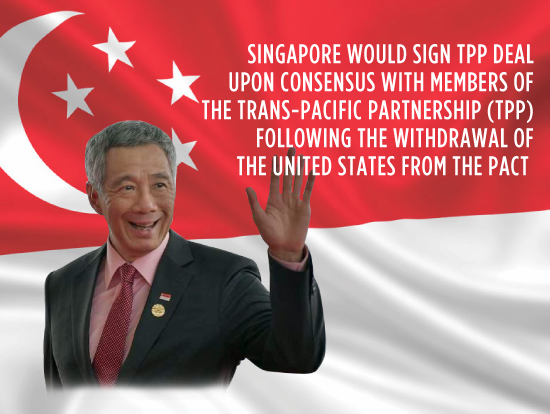 Singapore would sign TPP Deal upon consensus
Singaporean Prime Minister Lee Hsien Loong said his country would sign the trade deal if a unanimous decision is made by the remaining 11 members of the Trans-Pacific Partnership. However, he did express his uncertainty on whether the consensus would be achieved as the Japanese felt that the political and economic balance has shifted. Mr Lee said he will keep watch of the situation in the US, hoping that President Donald Trump will settle in his new role and begin to have an appreciation of the significance of the TPP on the world trade.
Source: Channel NewsAsia (1 March 2017)

Regulators and audit firms in bid to boost ASEAN audit quality
Four ASEAN audit regulators and the four largest audit firms in the region have jointly come up with a new initiative to enhance audit quality. They have also set a goal to measure the success of the initiative. The aim is to reduce the number of listed companies with inspection findings in their audits to 25 percent. According to Datuk Gumuri Hussain, the Executive Chairman of the Audit Oversight Board, this sustainable initiative would enhance public’s confidence in the capital market as well as the quality and reliability of the audited financial statements. These developments took place at the Asean Audit Regulators Group’s 5th annual Audit Inspection Workshop held in Kuala Lumpur from 21-22 February.
Source: The Star Online (22 February 2017)

ASEAN PMI rose in February
There was a slight increase in the Nikkei ASEAN Manufacturing Purchasing Managers’ Index (PMI) from 50.0 in January to 50.3 in February, signifying an economic expansion in the region. With a PMI of 54.2, Vietnam is the biggest contributor to the economic expansion in ASEAN, followed by Philippines (53.6) and Myanmar (51.9). Regionally, broad improvements were observed in most countries. Individually, the manufacturing industries are still growing at different speeds.
Source: Nikkei Asian Review (1 March 2017)

Saudi King Salman visits Indonesia
King Salman bin Abdul Aziz al-Saud will make an official visit to Jakarta before heading to Bali for a vacation. This visit has a far reaching impact on Indonesia as there will be a heavy focus on Islamic education and culture. The nations are expected to sign 10 memoranda of understandings, with the visit estimated to be worth more than US$20 billion. In light of economic uncertainties and unstable ties with the United States, the King is on a month-long tour to gain support across Asia.
Source: ABC News Online (1 March 2017)

Cambodia cancels counter terrorism exercise with Australia
Cambodian Ministry of Defence’s Department of Politics and Foreign Affairs, Sun Samnang, announced that the country had cancelled its annual counter-terrorism exercise with Australia. The reasons given were that the country will be occupied with the upcoming elections and budgetary constraints. There are concerns that Prime Minister, Hun Sen, will use military force during the elections.
Source: The Sydney Morning Herald (28 February 2017) &
Source: ABC (28 February 2017)

AirAsia envisions a listed ASEAN holding company
Founder of AirAsia, Tan Sri Tony Fernandes, aspires to combine the group’s separate units in in Malaysia, Thailand, Indonesia and the Philippines into a single listed Asean holding company. Mr Fernandes urged ASEAN governments to relax ownership restrictions and consider Asean investors as equivalent to local investors. The group fleet will increase by 200 aircraft this year, the company will roll out new destinations in ASEAN and the wider region as well as ramp up flights on trunk routes.
Source: The Star Online (23 February 2017)

Myanmar army denies involvement in lawyer’s murder
The Myanmar Army was not involved in the assassination of National League for Democracy legal adviser U Ko Ni said said chief of general staff Gen Mya Tun Oo in response to a journalist’s question at a military press conference. This comes after it was confirmed that former military officers are suspected of being behind murder.
Source: The Irrawady (1 March 2017)

Philippines to push for expansion of ASEAN services agreement
Singapore and China discussed ways to deepen and broaden the cooperation between both countries during the Joint Council for Bilateral Cooperation meeting.The countries will be working closely together on three flagship government-to-government (G2G) projects. One of the G2G projects is the Chongqing Connectivity Initiative, which aspires to turn Chongqing into a logistics and services hub in the near future.
Source: Channel NewsAsia (27 February 2017)