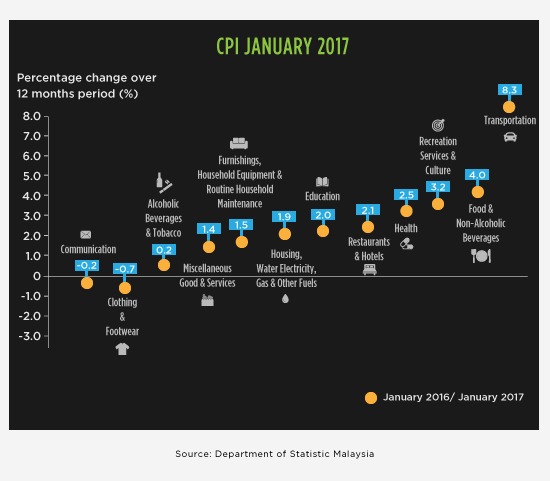 Malaysia’s inflation climbs 3.2 percent, higher than expected
The Malaysian Department of Statistics reported that the Consumer Price Index (CPI) saw a year-on-year increase of 3.2 percent. This is higher than the 2.7 percent increase expected by a Bloomberg estimate. CPI in January 2017 rose by 1.1 percent over December 2016. The major contributors to the unexpected rise in inflation were increases in the indices of transport (8.3 percent) and food & non-alcoholic beverages (4 percent). These two indices make up 30 percent of the CPI. Other areas which saw an increase were recreation services & culture (3.2 percent), health (2.5 percent), restaurants & hotels (2.1 percent), education (2 percent), housing, water, electricity, gas & other fuels(1.9 percent).
Source: The Star Online (22 February 2017)

Thailand removing sugar subsidies
In response to Brazil’s challenge that Thailand’s subsidies for sugar producers have pulled down global prices, the Thai government announced that it will stop these subsidies as well as end domestic price controls for sugar. This will be done by the end of 2017.
Source: The Bangkok Post (22 February 2017)

Singapore preparing to list new funds for first time in eight years
Preparations are underway in Singapore for the first new listing of leveraged and inverse exchange-traded funds (ETF) in almost eight years. This follows revised guidelines published by the Monetary Authority of Singapore in August 2016. Singapore, along with Hong Kong, is seeking to capture a bigger share of an expanding ETF market through types of funds that have been successful in Japan, Taiwan and Korea.
Source: The Straits Times (23 February 2017)

ASEAN Foreign Ministers express concern over China’s actions in South China Sea
At the end of a two day ASEAN Foreign Ministers’ Retreat in Boracay, Filipino Foreign Secretary, Perfecto Yasay, said that all his ASEAN counterparts were concerned about China’s actions in the South China Sea. In a press statement released by the ASEAN Secretariat the Chairman of the meeting said, “The Ministers underscored the importance of the full and effective implementation of the Declaration on the Conduct of Parties in the South China Sea in its entirety, and efforts within the ASEAN-China process to complete a framework of the Code of Conduct (COC), in order to facilitate the early adoption of the COC.” The framework of the COC is to be completed by June 2017.
Source: ASEAN Secretariat News (21 February 2017)
Source: The Straits Times (22 February 2017)

Thailand launches development plan dubbed “Thailand 4.0”
Malaysian Transport Minister, Datuk Seri Liow Tiong Lai, said that the Malaysian Cabinet has discussed plans to turn the country into a logistics hub. The Sepangar Bay Container Port in the state of Sabah together with Port Klang in the state of Selangor will be the key ports that are a part of this plan. Sabah, in particular, is ideally located to become the a hub for product distribution within ASEAN. Sabah falls on sea routes connecting South America and Australia to China. However, he said Sabah needs to develop more manufacturing and downstream activities which will ensure that ships leave the ports of Sabah at full capacity rather than half empty as they currently do. The current lack of cargo volume from Sabah means that containers are transshipped from Sabah to Port Klang. The Federal Government had previously approved RM1.027billion (US$231 million) its 11th five year plan for the expansion of Sepangar Bay Container Port to become a transshipment hub.
Source: The Star Online (16 February 2017)

Thailand keen to ink FTA with India
Thai Deputy Prime Minister, Somkid Jatusripitak, said, “We really want to work with the Indian government to have a free trade agreement (FTA) together even though we had some obstacles in the past.” In 2004, the two countries abolished duties on 82 items under an ‘Early Harvest Scheme’. These items included products like fruits, processed food, gems and jewellery, iron and steel, auto parts and electronic goods. This was the first step of the proposed bilateral FTA. The agreement could reduce and eliminate duties on approximately 90 percent of goods traded.
Source: Economic Times, India (16 February 2017)

Need for a collective voice from Brunei business community
A joint consultation of chambers and business associations in Brunei explored how the country’s businesses could have a single voice, especially when meeting foreign delegates. A delegate at the consultation noted that businesses from from China, South Korea, Japan and the United States are seeking to come to ASEAN and the delegates hoped to form a core team that would create this ‘one voice’. The session was attended by members of Asean Business Advisory Council (ABAC), business chambers, cooperatives, BIMP-EAGA Business Council, Brunei Association of Banks and business councils.
Source: Borneo Bulletin (14 February 2017)

RCEP agreement could be ready by November 2017
Filipino Trade Secretary, Ramon Lopez, said that there is a possibility of an agreement being reached on RCEP by November this year. The Philippines is looking to secure a significant milestone during its chairmanship of ASEAN and to speed up economic integration within the region. He added that the the reduction in tariff levels would be discussed at the ASEAN Economic Ministers Meeting in March. RCEP is a multilateral FTA between the 10 nations of ASEAN and Australia, China, India, Japan, New Zealand and South Korea.
Source: Manila Times (11 February 2017)

Philippines to push for expansion of ASEAN services agreement
Undersecretary for Trade and Industry, Ceferino Rodolfo, said the Philippines has a particular interest in the services agreement due to the country’s strength in the IT-BPO industry. The Philippines will push for the expansion and deepening of the ASEAN services agreement, tentatively over a 10-year transition period, to allow the liberalisation of more sectors, including the practice of professions and the movement of persons across all ASEAN member countries. Currently, the ASEAN Framework Agreement on Services (AFAS) has liberalised 11 sectors and completed eight mutual recognition agreements on professions and their standards. Under the ASEAN Economic Community 2025 Blueprint AFAS will be replaced with the more dynamic ASEAN Trade in Services Agreement (ATISA).
Source: Manila Bulletin (11 February 2017)

ASEAN needs to build bond market connectivity
The ASEAN bond market is fragmented with different currencies, legal regimes and foreign exchange control policies. At an annual conference organised by ratings agencies from Malaysia and Indonesia, Securities Commission Malaysia Chairman, Tan Sri Ranjit Ajit Singh, said there was no mutually-acceptable ASEAN rating scale nor an ASEAN bond asset class for investors as guidance. Several efforts had been made by the ASEAN Capital Market Forum (ACMF) to enable connectivity for ASEAN bond market, including the fully-harmonised prospectus disclosure requirement through the ASEAN Disclosure Standards. This has helped issuers from participating ASEAN jurisdictions in facilitating cross-border offering of equity and debt securities.
Source: The Star Online (15 February 2017)

ASEAN Convention Against Trafficking in Persons ratified by sixth nation
The ASEAN Convention Against Trafficking in Persons, Especially Women and Children (ACTIP) will enter into force in March. Philippines becomes the sixth ASEAN member-state to ratify the convention after Cambodia, Singapore, Thailand, Vietnam and Myanmar. ACTIP was signed by ASEAN leaders at the 27th ASEAN Summit in November 2015, ACTIP which is the first regionally binding instrument on trafficking in persons, will be the legal basis for ASEAN member-states to refer to when facing security challenges related to human trafficking. Permanent Representative of the Philippines on ASEAN Ambassador Elizabeth P. Buensuceso said that President Duterte places high importance to the fight against trafficking in persons.
Source: Business Mirror (13 February 2017)