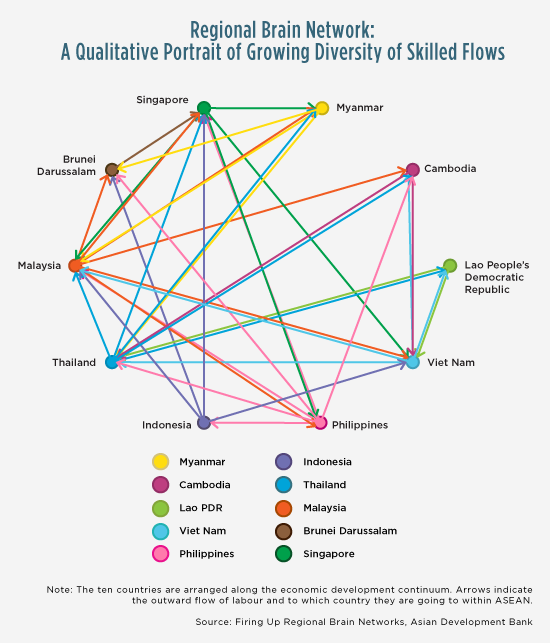 Brain drain in Philippines causing shortage in skilled labour
The Asian Development Bank released a report titled, “Firing Up Regional Brain Networks: The Promise of Brain Circulation in the ASEAN Economic Community.” The report states that the Philippines experienced the largest brain drain among the ASEAN countries in 2010 with 64% of its highly skilled labour (tertiary educated) leaving the country. While this leads to high remittances, USD 27 billion in 2014, it is also causing a labour shortage in skilled occupations such as nursing and engineering. However, the reports acknowledges the importance of labour mobility especially within the region and observes that no country can be “self-sufficient” when it comes to talent. The report also notes that in the last 30 years the number of university graduates in each of the 10 ASEAN member states has grown.
Source: Business World Online (8 February 2017)
Source: Asian Development Bank (February 2017)

China Steel looks to ASEAN in 2017
Taiwan’s largest steel maker is looking to increase its market share in ASEAN. The company said that the global steel market bounced back in the second half of 2016 after China cut its production, bringing back a balance between demand and supply. China Steel’s strategy is also in line with the Taiwanese Government’s New Southbound Policy which aims to forge stronger ties with Australia, New Zealand, India and countries in ASEAN.
Source: Focus Taiwan (8 February 2017)

Report offers ways to improve movement of labour within ASEAN
A Migration Policy Institute and Asian Development Bank report analyses the different routes to mutual recognition, as well as progress and challenges in the Mutual Recognition Agreements (MRAs) implementation over the years. The design of these MRAs differed and their implementation remains incomplete. The report offers five key lessons for ASEAN policy makers to improve the implementation of MRAs in the region. The researchers who wrote the report conclude that, “As a latecomer to the world of MRAs, the ASEAN region has the opportunity to create a new generation of MRAs based on the most informed notions of how professionals today build, develop and utilise skills.”
Source: Migration Policy Institute (8 February 2017)

Philippines seeks aid of US and China to protect southern waters
The Philippines is seeking US and Chinese help to guard the Sibutu Passage as Islamic militants shift attacks to international shipping. The deep-water channel is the fastest route from Australia to manufacturing giants China, Japan and South Korea. Each year 13,000 vessels pass through the channel which is situated between southern Philippines and the state of Sabah in Malaysia. Philippines Coast Guard chief, Commodore Joel Garcia, said rising incidents of piracy around the 29-kilometre-wide area threaten to increase overall shipping costs, including insurance for vessels, cargo and crew.
Source: Channel News Asia (8 February 2017)

Malaysia reports 1.5 percent growth in trade
Malaysian Minister of International Trade and Industry, Datuk Seri Mustapa Mohamed, announced a 1.5 percent growth in trade as well as a 19th consecutive year of trade surplus. Total trade was recorded at RM1.49 trillion (USD 336 billion) in 2016 compared with RM1.46 trillion (USD 329 billion) in the previous year. He reported that Malaysia’s largest trading partners were China and the United States followed by South Korea, Taiwan and Saudi Arabia. Major contributors to export growth were an expansion of manufactured and agricultural exports which grew by 3.2 per cent and 4.7 per cent, respectively. Trade with ASEAN countries grew by RM1.41 billion (USD 317 million). Singapore remains Malaysia’s largest export market within the region accounting for 49.6% of all exports to ASEAN.
Source: Malay Mail Online (8 February 2017)

Indonesia foreign reserves continue to grow
Bank Indonesia (BI) announced that its foreign reserves had grown by USD 500 million climbing from USD 116.4 billion in December 2016 to USD 116.9 billion in January 2017. This allows the country to cover 8.7 months’ worth of imports whereas the international standards states that a country should have enough foreign reserves to cover imports for three months. BI spokesman Tirta Segara was quoted as saying, “Bank Indonesia believes that exports can support Indonesia’s resilience to external pressure as well as supporting economic growth.”
Source: The Jakarta Post (8 February 2017)

Speeding up process of passport issuance to prevent deportation
Labour Ministry spokesman, Ananchai Uthaipatanacheep, said that Cambodian authorities were working to issue passports and other travel documents to over 240,000 Cambodian workers in Thailand, a task that should be completed by June this year. Cambodian workers who hold pink cards are allowed to work in Thailand temporarily but they are required to pass a nationality verification process to extend their work period and continue working in Thailand legally. Vice-chairman of the Committee for Providing Legalisation to Cambodian Workers, Hun Manet, together with Cambodian officials met Thai Labour Minister, Sirichai Distakul, in Thailand to talk about cooperation between authorities from both countries in conducting the nationality verification process for Cambodian workers.
Source: Cambodia Daily (31 January 2017)

Price of water goes up in Singapore first time in 17 years
Singaporean Minister for the Environment and Water Resources, Masagos Zulkifli, said that the new tariffs for water will be announced on February 20. He also said that the prices had to be increased to reflect the scarcity of the resource in the country, the cost of an desalination and renewing of old infrastructure such as production plants and pipelines. Currently, tariffs for domestic potable water, are at $1.17 (USD 0.83) per cubic metre for the first 40 cubic metres, and $1.40 (USD 0.99) per cubic metre thereafter, excluding taxes.
Source: The Straits Times (8 February 2017)

Thailand maintains interest rates to encourage growth
Thailand’s central bank held key interest rates at 1.5 percent, a near record low, to keep the economic environment conducive for growth. Bank of Thailand said that the decision was unanimous. Thailand’s economic growth is also predicted to fall behind all it ASEAN peers, according to IMF. The decision to maintain rates comes on the back of both private consumption and investment indicators weakening in the fourth quarter of 2016. Additionally, a recent crackdown on cheap tour packages has hurt the tourism sector.
Source: Bloomberg (8 February 2017)