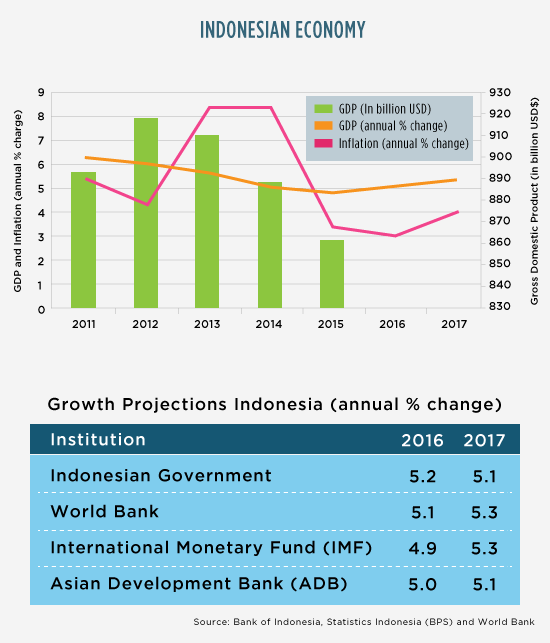 Indonesia Economy to Grow 5.1%
The Asian Development Bank estimated the Indonesian economy to grow at 5.1% in 2015, a slight improvement from 5.0% in 2016 due to support from the ongoing improvement of private investment and robust consumption in Indonesia. On the other hand, inflation rate is expected to edge up to 4.0% in 2017 from last year’s 3.5%. According to the statistics bureau on 1 February, Indonesia’s January’s annual headline rate was 3.49%, higher than the 3.11% expected in a Reuters poll and December’s 3.02%. The acceleration in the rate was mainly due to increases in the prices of processed food as well as cigarettes. Core inflation, which strips out administered and volatile food prices, also picked up in January, to 3.35% from 3.07% the previous month.
Source: The Financial (01 February 2017)
Source: Business Times (01 February 2017)

Economic Zone is Thailand’s Top Agenda
The Thai government is prioritising the creation of a special economic zone for the year of 2017. According to Industry Minister Uttama Savanayana, the Eastern Economic Corridor (EEC) special economic zone project will provide extra investment privileges, which include five-year work permits and visas for foreign specialists and expatriates as well as special funds, or soft loans for companies that invest in the EEC areas to help them enhance their competitiveness. These incentives will help increase investment in Eastern Thailand, where there is potential to create technological transfers and improve industries.
Source: Bangkok Post (02 February 2017)

Changes to Companies Act Positive for Entrepreneurs and SMEs
According to legal experts, the changes made to the Companies Act 2016 (Act 777) are positive for entrepreneurs as well as small medium enterprise (SME) owners, because the new provisions will lower costs and improve the ease of doing business. The changes came into effect since 31 January and comprise of 617 provisions for Act 777 compared with 350 provisions previously. According to Companies Commission of Malaysia, the new laws are on par with global standards and ensure that the route for starting a business in Malaysia is more competitive, which, in turn, will promote the growth of SMEs in the country. In addition, the move will also encourage more foreign direct investment, as overseas firms can now set up shop without appointing local directors.
Source: The Star (02 February 2017)

Myanmar Draft Foreigner Laws Worry Expats
Two draft laws concerning foreigners are creating concerns among the expat community and could undermine the government of Myanmar’s stated priorities in attracting responsible foreign investment and promoting a human rights agenda, lawyers and business experts say. The laws would require foreigners who live and work in Myanmar to obtain a slew of documentation and would also place restrictions on travelling or relocating. On 31 January, nine organizations representing foreign businesses in Myanmar said the travel restrictions outlined in the bill would not be practical for foreign workers and had the potential to deter investments. The Ministry of Labour, Immigration and Population is behind both bills. Last year, the World Bank ranked Myanmar 17 out of 190 economies on the ease of doing business.
Source: Frontier Myanmar (01 February 2017)

Singapore Reduce Fees for Filing Patents and Trademarks
Staring on 1 April, Singapore will cut fees for business and entrepreneurs when they file for patent and trademark protection with the Intellectual Property Office Singapore (IPOS). However, to discourage IP hoarding, which can stifle innovation, fees for renewing patents and trademarks will see an upward adjustment. On the other hand, patent owners who are willing to offer their patents for licensing will continue to enjoy a 50% discount in patent renewal fees. This will encourage IP owners to actively use their patents, or consider releasing them to the public domain, so as to fuel further innovations.
Source: The Straits Times (01 February 2017)

Thailand and Myanmar Signs 16 Business Agreements
Thailand’s Deputy Prime Minister led a delegation comprised of major Thai businesses that met with a team of Myanmar officials to seek further cooperation in developing industrial estates in Myanmar and border trade operations. On 2 February, the two governments signed 16 bilateral business memoranda of understanding (MoU) in six different business sectors, which include banking, infrastructure development and agriculture. According to the Directorate of Investment and Company Administration, Thailand’s investment in Myanmar reached US$106 million during the 2016-2017 fiscal year. Thailand invests more money in Myanmar annually than all but three other nations – Singapore (US$2.6 billion), China (US$447 million) and Hong Kong (US$187 million).
Source: The Irrawaddy (02 February 2017)

South Korea Pledges US$417 million in Development Loans to Cambodia
Cambodia will receive US$417 million in development loans from South Korea this week, much of it will be used to finance priority projects through 2018 relating to infrastructure, irrigation, health, rural roads and sewage system, bringing its total assistance to more than US$88 million since 2001. The aid follows a continuing shift in the Cambodian government’s focus from a historical friendship with North Korea to a broader diplomatic relationship with South Korea. The two countries also announced a plan to sign an agreement formalizing military collaboration.
Source: Cambodia Daily (31 January 2017)

Inflation Accelerate to 3-Year High While Currency Drops to 1 Month Low
According to data released by Nikkei, Vietnam’s CPI accelerated to 3-year high in January, which is primarily driven by the rise in transport prices, while industrial output slowed drastically, and the currency dong fell to a 1-month low against the dollar. On the other hand, retail sales increased 9.9% y-o-y in January, mainly supported by a 30.7% spike in tourism sales. According to data from the General Statistics Office, foreign direct investment (FDI) into Vietnam from the start of the year until 20 January has reached US$1.42 billion. The amount exceeded FDI during the same period in 2016 by 6.6%. Singapore was the most significant investor with US$416.7 million, while South Korea came in second with US$347.8 million and China at third with US$310.1 million.
Source: Vietnam News (02 February 2017)

Malaysia, Myanmar, Vietnam and Philippines Recorded Gains for Manufacturing PMI
Nikkei’s Purchasing Managers Index (PMI) showed Malaysia recording a score of 48.6, up from 47.1 in December and the lowest level of decline since April 2015. The Philippines marked the strongest growth among ASEAN nations, at 52.7, followed by Vietnam’s 51.9. On the other hand, Myanmar saw the best improvement in manufacturing operating conditions for 12 months at 51.7. Growth in Indonesia was marginal while Singapore, like Malaysia, remained in a contraction. Scores below 50 on the index signify a contraction, while higher figures indicate an improvement in the sector. For ASEAN, Nikkei said the region was showing an overall improvement, with strong growth in the Philippines and Myanmar. According to Nikkei, demand for ASEAN products appeared to be primarily driven by domestic markets rather than external sources.
Source: Nikkei (02 February 2017)

20,000 New Jobs to be Created in 2017 Despite Lowest Investment Level Since 2007
According to the Economic Development Board on 2 February, Singapore sees little growth in fixed-asset investments this year after commitments fell to the lowest level since at least 2007. Singapore, an export driven country, last year posted its worst economic performance since the 2009 global financial crisis and the government is currently forecasting an economic growth of between 1% to 3% for this year. However, despite these gloomy forecasts, as many as 20,100 jobs will be created this year as investment projects in the pipeline get fully implemented.
Source: Bangkok Post (02 February 2017)
Source: International Business Times (02 February 2017)