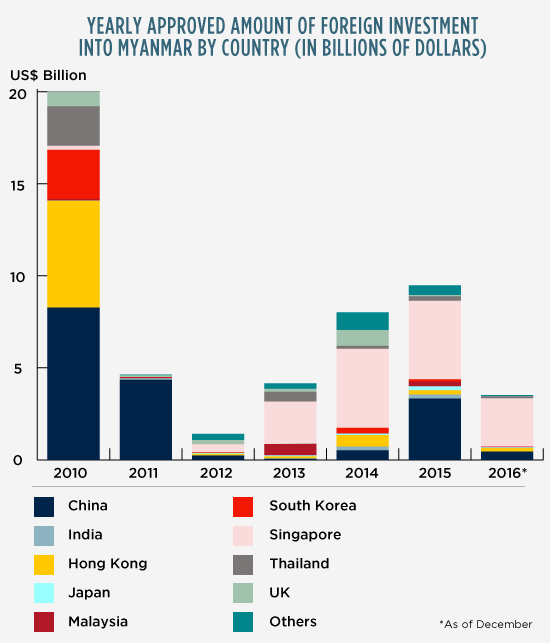 Myanmar’s Foreign Direct Investment Recedes
“Global Economic Prospects” by The World Bank highlighted Myanmar’s economic slowdown with growth forecast for 2017 revised downward by 1.5 points to 6.9%. The cut came after the country, which used to enjoy the fastest growth rate in Southeast Asia, lagged behind the Philippines, Laos and Cambodia in 2016. The World Bank attributed the falling growth rate to the sluggish real estate market and slower export expansion. However, chief economist at DMS, a wholly owned Myanmar subsidiary of Daiwa Institute of Research Holdings, said that the main reason of the decreasing growth rate is due to declining foreign investment, which was reduced by 28% from April to December 2016 when compared to same period in 2015.
Source: Nikkei Asian Review (18 January 2017)

Central Bank of Malaysia Expected to Keep Rate at 3.0%
Malaysia’s central bank monetary policy committee held the Overnight Policy Rate unchanged at 3.0% on 19 January at its first of the six scheduled meetings in 2017. The decision came as policymakers work to stabilize a fragile ringgit currency and support an economy that is just starting to pull ahead after well over a year of slowing growth. The economy ended five straight quarters of slowing growth by expanding 4.3% in the September quarter of 2016. The government expects growth to be at 4.0% to 5.0% in 2017, up from its forecast of 4.0% to 4.5% for last year, on continued support from domestic demand and a recovery in global commodity prices.
Source: The Straits Times (19 January 2017)

Singapore Top in Asia-Pacific for Talent Competitiveness
The annual Global Talent Competitiveness Index (GTCI) ranks Singapore first in the Asia-Pacific for the fourth year running in a global index on talent competitiveness, trumping Australia. Globally, Singapore placed second among more than 100 countries while the top spot was taken by Switzerland. Britain and the United States came in third and fourth respectively after Singapore. The high-ranking countries share key traits including educational systems that meet the needs of the economy, flexible employment policies, mobility and entrepreneurship and high connectedness of stakeholders in business and government.
Source: The Business Times (16 January 2017)

Japan offers New Patrol Boats to Vietnam
Japan Prime Minister announced that Japan would supply six new patrol vessels to Vietnam valued at a total of 38.5 billion yen (US$338 million) to help its maritime safety efforts amid China’s expanding activities at sea. Shinzo Abe also said that the vessels, which Vietnam would repay through a concessional loan, are aimed at enhancing bilateral cooperation between the two countries. In addition to strengthening security dialogue and defense cooperation, Abe was set to offer Japanese cooperation on infrastructure development in Vietnam. The Japanese Prime Minister’s stop in Vietnam completes a tour of a region where Japan stakes a leadership claim in the face of China’s growing dominance.
Source: Reuters (16 January 2017)

Indonesia Maintains Interest Rates on Capital Outflow Risk
The central bank of Indonesia decided to keep its benchmark seven-day reverse repurchase rate at 4,75%, while the Deposit Facility and Lending Facility rates were maintained at 4.00% and 5.50% respectively. The decision was made during the January 2017 policy meeting on 19 January due to risks of capital outflow. Taking advantage of low inflation rates, a comfortable current account deficit and largely stable rupiah, Bank Indonesia cut its key rate six times in the first 10 months of 2016, by a total of 150 basis points. The World Bank said it sees Indonesia’s economy growing at a pace of 5.3% year-on-year in 2017, from an estimated 5.0% year-on-year in 2016.
Source: Indonesia Investments (19 January 2017)

Survey Finds Higher Confidence for Economic Growth in Thailand
The survey by the Federation of Thai Industries (FTI) and the National Institute of Development Association (Nida) found that there is an increase optimism and confidence in the economic growth of Thailand for 2017. The survey on the economic and industrial outlook in 2017 covered 45 major industries and 10 industrial institutes with respondents from more than 1,000 companies. Major positive factors that are expected to support Thai’s economic growth in 2017 are the government’s policy to promote investment in special economic zones, especially the Eastern Economic Corridor (EEC), and the project to drive Thailand into the high-tech era of Thailand 4.0.
Source: Bangkok Post (4 January 2017)

Cambodia Cancels Military Exercise with the U.S.
Cambodia has informed the U.S. that it is cancelling an annual joint military exercise for 2017 and 2018, even though planning for the event had already begun. The cancellation was due to Cambodian forces’ inability to fully participate as a result of local elections that is taking place in June and a six-month campaign to eradicate drug-related crime. ASEAN member states, even traditional allies of the U.S. such as the Philippines, have recently drawn closer to China as Beijing flexes it diplomatic and military muscle in the region.
Source:The Star (18 January 2017)

Government Gives Two Important Boosts to Malaysian Employers
Defence ministers of Vietnam, Cambodia and Laos signed agreements to boost long-standing military cooperation via programmes to be implemented in 2017. The programme includes enhanced exchanges on defence policy at the deputy ministerial level, intelligence sharing and better military education and training. The agreements, boosting long-standing ties of friendship between the three countries were made during a visit made by Laos and Cambodian defence ministers to the central city of Đà Nẵng from 8 January 2017 to 11 January 2017.
Source: Vietnam News (10 January 2017)

Philippines Gain Better Growth Outlook for 2017
HSBC raised the Philippines GDP growth outlook to 6.5% from 6.3% and upgraded its growth estimate for the full year 2017 to 6.8% from 6.5%, citing robust consumption and resilient domestic demand and investments. Although there are fears that investment from the US, which is the largest contributor of foreign direct investments in the Philippines, might fall under the new U.S. economic policies, China’s recent investment commitments of US$24 billion to the Philippines would partly offset the potential decline in FDI from the U.S.
Source: ABS CBN News (17 January 2017)

Myanmar allows Malaysian aid to enter Rakhine State
Myanmar government has granted permission for aid from Malaysia’s Food Flotilla Humanitarian Mission for Myanmar to enter Sittwe in Rakhine on 3 February. However, the shipment, meant for the Rohingya community, can only be dropped off in Yangon and not Sittwe as originally planned. Malaysia’s Prime Minister also openly urged the Myanmar government to end the reported violence and discrimination against the stateless Rohingya Muslim in Rakhine state during a special meeting of the foreign ministers of the Organization of Islamic Cooperation (OIC) on 19 January.
Source: The Malay Mail Online (20 January 2017)