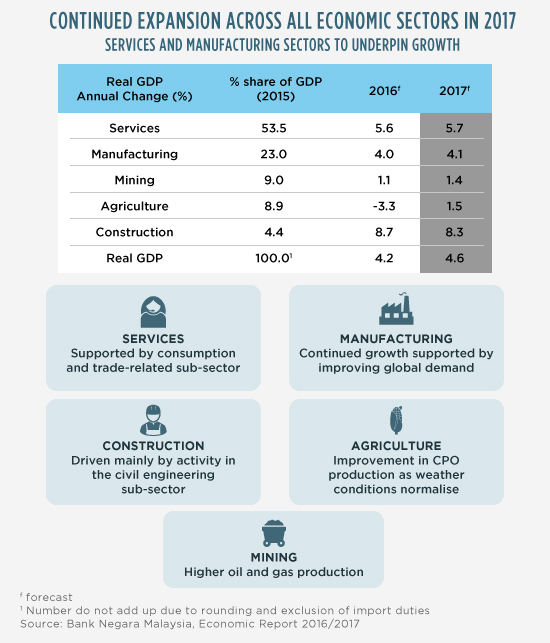 Promising Prospects for Malaysian Economy in 2017
The Malaysian economy is forecasted to grow at a pace of 4% in 2017 and strengthening to 4.4% in 2018. Malaysia’s Prime Minister is also optimistic about the ringgit’s chances of stabilising in 2017, due to measures taken by the Malaysian Central Bank. He added that the decline of the Malaysian currency, which lost about 22% since the start of 2015 and became the worst performing currency in emerging Asia, was out of the Government’s control and the problem is not unique to the country. He named three factors that affected the decline of the ringgit’s value, which are “excessive speculation in the offshore market”, the drop in price of crude oil and the rise in U.S. interest rates. The president of the Financial Markets Association of Malaysia, Lee Kok Kwan also said that the ringgit is set to rebound from a 19-year low as official measures taken to boost demand for the currency kick in, adding that “Malaysia’s fundamentals are steady and look decent”.
Source: The Star (9 January 2017)
Source: The Star (10 January 2017)
Source: Bloomberg (10 January 2017)

Russia and Philippines are Pursuing Closer Economic and Security Ties
Russia is ready to supply the Philippines with sophisticated weapons after the U.S.’ decision to withhold the shipment of 26, 000 rifles to the Philippines, and aims to become its close friend. Following the deteriorating relationship with the U.S., the Philippines have been taking steps to boost ties with China and Russia. President Duterte said that he hoped Moscow would become his country’s ally and protector.
Source: Reuters (6 January 2017)
Source: The Star (8 January 2017)

Singapore to Deliver New Map Under Strain
The country’s Committee on the Future Economy (CFE) is due to deliver a blueprint outlining strategies and recommendations for long term restructuring, which will be vital to boost Singapore’s economy as it seeks new growth engines. Although Singapore’s 1.8% full year growth for 2016 beat the government’s own estimates, it is the lowest since 2009’s recession. In the coming year, risks of a volatile global economy, rising trade protectionism in the US and a slowdown in China would collectively dim the economic prospects of Southeast Asia’s only developed economy. The government expects growth in 2017 to be between 1% and 3%, although private sector economists are less optimistic.
Source: Bloomberg (5 January 2017)
Source: Today Online (9 January 2017)

Indonesia Bars JPMorgan from Next Dollar Sukuk Issuance
The country has barred U.S. bank JPMorgan Chase & Co from submitting an underwriting proposal for its next issuance of dollar-denominated Islamic bonds. The ban came after Indonesia’s penalization to the bank following its issuance of a negative report on Indonesia in November, where JPMorgan downgraded its Indonesian stocks recommendation to “underweight” from “overweight”. The Finance Ministry dropped the U.S. Bank’s services as a primary dealer for domestic sovereign bonds and as an underwriter for bonds sold to the global market. The bank also no longer receives certain transfer of state revenue.
Source: Reuters (9 January 2017)

Singapore and Cambodia Strengthen Ties
The two countries signed two agreements on 9 January 2017 to boost cooperation in the fields of vocational education and healthcare. One agreement will help master trainers in Cambodia hone their skills in three areas: infocommunications technology, electronics and automotive technology. The second agreement renews and expands a three-year collaboration between Singapore’s Tan Tock Seng Hospital and Calmette Hospital in Phnom Penh to work together on trauma care and resuscitation training. According to Singapore President Tony Tan Keng Yam, the two countries will naturally grow closer together as ASEAN continues on its path of integration.
Source: Straits Times (9 January 2017)
Source: Channel News Asia (8 January 2017)

Minimal Gain for Thailand Despite AEC
A year after the establishment of AEC, Vice-President of the Board of Trade of Thailand says the country has seemingly gained little from the regional economic integration. Director General of the Trade Negotiations Department adds that the number of non-tariff barriers and technical trade barriers among ASEAN members had actually increased. The Commerce Ministry reported that Thailand’s border trade from January to November of 2016 totaled to 1.33 trillion baht, up 1.27% from the same period in 2015. Thailand Development Research Institute also notes that the country’s public and private sectors have been slow to cash in on opportunities available in CLMV regarding expanded trade and investment.
Source: Bangkok Post (4 January 2017)

President Duterte Launches US$2 Billion Global Bond Issue
The Philippine launched a debt buyback and global bond issue targeted to ease the government’s debt burden. The government said it would offer new 25-year global peso bonds due in 2041. Philippine’s National Treasurer, Roberto Tan told reporters both the buyback and fresh issuance could be worth up to US$2 billion, “depending on market conditions”. Of the US$2 billion, Tan said US$500 million would be used to finance this year’s US$67.7 billion national budget and the rest would be used to settle obligations.
Source:The Star (10 January 2017)

Vietnam, Laos and Cambodia Strengthen Defence Ties
Defence ministers of Vietnam, Cambodia and Laos signed agreements to boost long-standing military cooperation via programmes to be implemented in 2017. The programme includes enhanced exchanges on defence policy at the deputy ministerial level, intelligence sharing and better military education and training. The agreements, boosting long-standing ties of friendship between the three countries were made during a visit made by Laos and Cambodian defence ministers to the central city of Đà Nẵng from 8 January 2017 to 11 January 2017.
Source: Vietnam News (10 January 2017)

Indonesia Restores Military Cooperation with Australia
Indonesia has restored military cooperation with Australia after suspending it due to “technical matters”. Following a local media report, Indonesian Defence Force spokesman said on 4th January, that some lesson materials insulting Indonesia were found at Australia’s special force academy. Another document that was found later had contents that insult Indonesia’s state ideology Pancasila, that is based on the principles of consultative democracy, social justice, humanitarianism, the unity of Indonesia’s people and devotion to a single God.
Source: The Star (10 January 2017)

Malaysian Launches Islamic Fund and Wealth Management Blueprint
Securities Commission Malaysia launched a five-year Islamic Fund and Wealth Management blueprint on 12 January. Malaysia currently has Islamic assets under management at US$29.66 billion (MYR132.4 billion), which is among the largest in the world. It is also a primary marketplace for global sukuk issuance, commanding 54% of global sukuk outstanding. Among the three areas the blueprint will work on are to strengthen Malaysia’s position as a global hub for Islamic funds, establish the country as a regional center for shariah-compliant sustainable and responsible investment, and develop it as an international provider of Islamic wealth management services.
Source: The Sun Daily (13 January 2017)