GOOD times and prospects of gain tend to diminish consideration of risk, a trait universal and not just Asian. Actually there are a number of political, social and economic factors which could hold back, even reverse, Asia’s economic rise.

And, as recent financial market attack on currencies, bonds and stocks of a number of countries in emerging Asia shows, there are situational circumstances which could have the systemic consequence of thwarting that rise.

But first, let’s look at future prospects. It is of course based on certain assumptions, primarily rates of economic growth in a stable environment. However, there is also this fact: there has been a shift in Asia’s share of global output, driven by a higher rate of growth over a period of time compared with Western economies which however, continue to be dominant.

The combined gross domestic product (GDP) of Asean, China, India, Japan and South Korea as a percentage of total global output has grown from 23% at the turn of the century to 27% today. It dipped to 21% in 2008 as a result of the Western financial and economic crisis. That of the United States, European Union and Canada has shown a steady decline from 59% to 56% to 48%. There is a clear trend: that of the above Asian emerging economies was 9% in 1960, 14% in 1970 of total global output, the Western economies 69% and 67%. 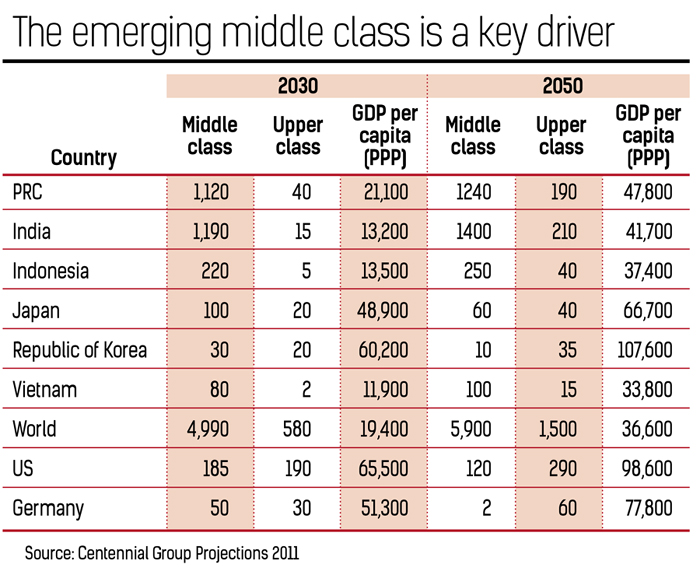 But there can be interruptions. Emerging Asia’s GDP that has been building up since the rise of the Asian “tigers” with rates of growth in excess of 7%, was severely jolted by the 1997-1998 financial crisis. However, Asia’s tigers, cubs and giants are back on the trend-line again.

An extrapolation of the trend shows stunning economic prospects. The tables show the future GDP of a select Asia-Seven countries which will be the engine for growth both in Asia and the world; and the size of the middle class of leading Asian economies which will be the key driver of that growth. As noted, consumption by the global middle class accounts for one-third of global demand.

All this can get to the head. Is there already hubris? Japan as No.1? Look where it has been in the past two decades. Look at where the West have put itself after the triumphalism of Fukuyama’s “End of History” following the crashing down of the Berlin Wall in 1989 and the fall of communism. Mismanagement, wars, excess and denial.

Asia has its own set of political issues. The sense of superiority about Asian values that drove political systems does not any longer wash. Neither does the axiom economic growth alone will take care of everything, including political stability.

The world has changed since the halcyon days of Deng Xiaoping, Lee Kuan Yew or Mahathir. Civil society is more assertive. There has been global democratisation with the information technology (IT) revolution, whether domestic leaders like it or not. It is not that opinion and pressure work in favour of a particular system of western democracy. The call is for justice, rule of law, accountability, and against corruption. Asian political systems which do not deliver these political goods are setting themselves up for turmoil and instability, even insurrection and bloodshed – all of which will undermine, retard and reverse Asia’s economic rise.

Greater consciousness of individual and group rights arises from economic growth. Indeed, economic growth also facilitated IT access. The mistake in Asia is governments assuming the populace should show gratitude for the grapes of growth (not wrath!), and not to absorb the fact that people contributed to the growth and are entitled to it.

Governments cannot control the social consequences of economic growth for the individual or the development of his personality. When they try to do so they encounter resistance whether in the ballot box or on the streets, sometimes both. What they can do is to address the social costs such as inequality of income and opportunity, or environmental degradation.

In international politics, Asian governments have tended to be platitudinous in addressing issues that could upset the applecart of Asia’s economic rise. In South-East Asia, for instance, the Asean way has not developed into a means of dispute settlement. The fact there has been general peace in the region since the end of the Vietnam war in 1975 does not mean it will remain that way (but bear in mind, for instance, what the Pol Pot regime inflicted on Cambodia), especially with disputes unresolved in the South China Sea. The same applies to North-East Asia. There must be regional leadership and development of dispute settlement mechanisms, not just more and more meetings in the hope disputes will not boil over – and spoil the prospect of Asia’s economic rise. 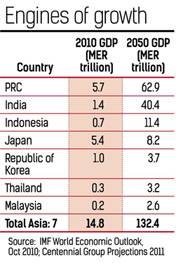 If more limited inter-state disputes and, particularly, intra-state problems are also taken into account – like between Thailand and Cambodia or the genocide in Myanmar or North Korean adventurism – it would appear Asia could be sitting on a tinderbox that may blow up its rosy economic future. There are clear risks that must be addressed.

Of course the risks most often mentioned are economic risks. The 1997-1998 crisis exposed structural macro-economic, financial and corporate governance problems which wrecked a number of Asian economies. Most of them have been addressed, putting Asia on a better footing when the 2008 Western financial and economic crisis came along – with roles rather reversed, Western economic and financial mismanagement being the cause of that disorder.

But with a difference.

With their role and size, dominant Western economies can address their problems in ways rising Asian economies cannot. There is no way Indonesia or India, could have embarked on the kind of quantitative easing (QE) as the Fed has done in the United States without their currencies being taken to the cleaners. As a reserve currency, there is demand for the dollar beyond its net asset backing as it were. If we examined its macro-economic management, the United States fails on all scores: whether deficit as a proportion of GDP; total national debt, public or private; the trade deficit and so on.

Yet the US economy seems to have come out of the woods because of other strong factor endowments, particularly the reserve currency position of the dollar.

With demand for the dollar and with free movement of capital, the QE which the Fed had embarked on these past months to stimulate the US economy has benefited financial markets in fast growing economies as well – especially emerging Asia. Following talk of a tapering of the QE, with the American economy showing good signs of a revival and even Europe appearing to be turning around, there has been a flow-back which has affected the values of Asian currencies, bonds and stocks.

Therefore, even as Asia has risen, and is rising, it must never be forgotten it is a minnow in relation to the force of financial flows which are largely Western-driven. Although this time rising Asian financial markets have not been emptied because macro-economic management has so much improved, particularly level of external debt, the lesson that must not be forgotten is that Asian economies are exposed to financial flows largely outside their control – and these flows can destroy their economies if mismanaged. Herein lies a massive risk to Asia’s economic rise.

Until and unless Asian economies have become big enough to generate sustainable economic demand and to project financial markets whose products are a proxy of that demand – currency, bonds and stocks – rising Asia will have to adhere to the discipline of financial flows very much outside their control.

In the recent financial market tumult caused by expectation of the tapering of QE, a member of the Fed was reported to have said, emerging markets will have to fend for themselves. I was reminded of that time during the 1997-1998 crisis when, as chairman of the Securities Commission fighting our corner against the mayhem caused by unregulated hedge funds, I was simply told by a big market regulator: “if you can’t stand the heat, get out of the kitchen.”