One of the main reasons behind the downshift in global growth has been the structural decline in global trade (Figure 1). For ASEAN economies, this has been particularly relevant given their dependence on the external sector.

To briefly recap. ASEAN and global trade has been going through a slump over the last five years (Figure 2). In US dollar terms, several Asian countries, ASEAN as well as China, have had negative export growth every month for over 18 months. Even considering the worst of crises, this is unprecedented. Recently, in volume terms there has been a flattening out of trade growth and while in US dollar terms, some of the numbers have become less negative, the outlook is far from constructive.

There are several Issues that have affected trade flows and reduced the trade multiplier from close to 2.3 in the mid 1990s to just above 1 today1. One of these reasons – partly structural, partly cyclical – is the slump in global investment. A large part of global trade is in intermediate goods and machinery, and as investment demand has struggled, so has trade. 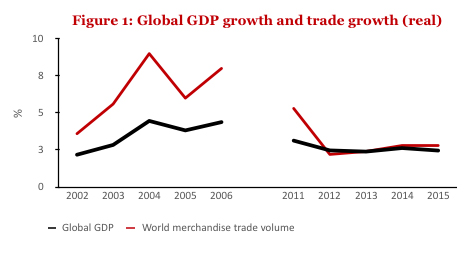 China too has played a large role in the trade slowdown. Not only is its growth rate slowing, they are rebalancing the economy and trying to change the composition of growth. They are trying to move from investment demand to consumption, and the latter is less import intensive. Similarly, on the supply side, there is a shift to services from manufacturing where the former is less import intensive.

But perhaps more than either of these economic rebalancing shifts, the larger effect is coming via China’s move away from resource-intensive growth and a move up the value chain. Further, it is on-shoring the production of various intermediate inputs that it had previously imported. At its peak, China used to import about 65 cents worth of inputs for every dollar of exports. Today, it is about 35 cents and likely to go even lower. These changes in trade patterns are likely to affect overall ASEAN trade but not all of it is likely to be negative. 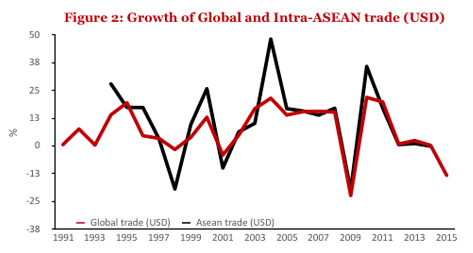 There is a two-way causality between trade and investment. As established above, investment demand is a significant driver of trade flows. However, on its own, trade too boosts growth and productivity, which in turn creates the need for investment. These findings suggest at least two immediate policy initiatives.

The first is to try and boost investment demand. While private investment is unlikely to respond in the near term as the returns to it are low, authorities should try and boost public investment. Indeed, in Indonesia, Thailand and Vietnam that is exactly what is being done and the benefits should follow. In this era of sluggish global growth, and in particular a slowing Chinese economy, the role of fiscal policy has become even more important. It can not only support domestic demand directly but, if coordinated between countries, can give a much-needed boost to the external sector and ignite a positive feedback loop to domestic demand.

The second is to undertake measures to boost trade directly. That effectively means a continued movement toward integration, liberalization and the removal of both tariff and non-tariff barriers. Recently, at a global level, there has been a rise in protectionism, in both action and rhetoric. The backlash against globalization is understandable in a sluggish economic environment where jobs are hard to come by and income growth is poor. However, trade is not the culprit as it boosts growth. But it also creates winners and losers and hence has an income redistribution effect within economies. And it is this income redistribution that has led to the disaffection which policymakers need to address while finding means of boosting trade. For ASEAN economies, trade is likely to play an important role in any recovery.

Some of China’s rebalancing has been by design but some has also been forced on it. As demographics have changed, wages have risen, and with productivity growth not keeping pace, unit labor costs have gone up. That has forced China to start reducing its exports of labor-intensive light manufacturing industries such as garments, footwear, toys and furniture2. This has created an opportunity for CMLV economies which needs to be seized with pro-active policy measures. All these economies have low wages and Vietnam and Cambodia have established manufacturing bases. But as we know, China did not become a manufacturing and exporting juggernaut merely because it had cheap labor. There was supporting infrastructure, an ease of setting up and doing business, access to credit, reliable labor etc. etc. That is the challenge for CLMV economies. The lower-wage labor is there in abundance. They need to create the enabling environment for it to flourish.