Hot on the heels of the special ASEAN meeting in Jakarta to address the Myanmar political crisis, ASEAN dropped its five-year report card last week on the 28th of April for the ASEAN Economic Community implementation since it was announced in 2015.

By analysing the achievements of the over 1,700 action lines in the ASEAN 2025: Forging Ahead Together Blueprint, ASEAN scored a completion rate of 54.1% across five AEC Blueprint characteristics with the rest of the action lines either in progress (34.2%), not started (9.2%) or withdrawn (2.5%). 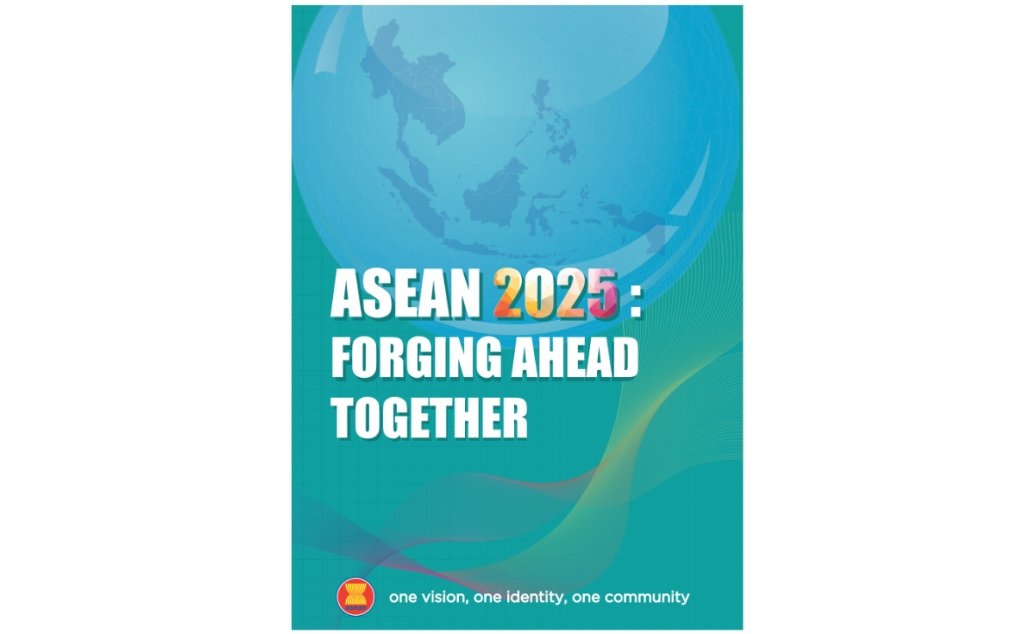 Measure impact beyond checking the boxes

There were bright spots and encouraging milestones in the past five years. Among the headline achievements were the conclusion and signing of the Regional Comprehensive Economic Partnership (RCEP), the operalisation of the ASEAN Open Skies, ASEAN Single Window and ASEAN Customs Transit System (ACTS). Various improvements in impediment indicators such as the time needed to start a business in ASEAN dropped from 24.5 days in 2017 to 14.5 days in 2020; financial exclusion levels dropped from 44% to 30.2% (projected).

It should be acutely noted, however, many of the action lines in the AEC 2025 blueprint are capacity building in nature designed to equip the public sector officers and raise awareness in the private sector. A significant disparity in the degree of potential impact exists between these action items and they carry different weightage in economic community building.

ASEAN’s newly appointed Deputy Secretary-General for AEC Satvinder Singh from Singapore acknowledged this and remarked at the virtual launch of the midterm review report that the AEC should be measured based on “results and impact and AEC needs to translate to meaningful value to all of us”.

In respect of “translating to meaningful value to all of us”, the business community would be quick to point out that many of the recommendations from the private sector have fallen through the cracks, if not on deaf ears.

Specifically, the elimination of the non-tariff barriers (NTBs) remains a moving and hopeless target. First expressed in the AEC Blueprint 2015 and later carried forward to 2025, the aspiration to remove all NTBs looks like an impossible dream.

This year, internally in ASEAN Secretariat, ASEAN has set an extremely low target to resolve actual cases of unfair NTM complaints — at just two, a puny target next to the total NTMs in ASEAN For a meaningful context, ASEAN has a combined NTMs of 9,494 based on UNCTAD’s data in 2020. The target in the AEC 2025 to remove all NTBs looks certain to fail miserably.

ASEAN needs to have a reality check on the aspiration gap.

A new and nuanced narrative for NTMs needed 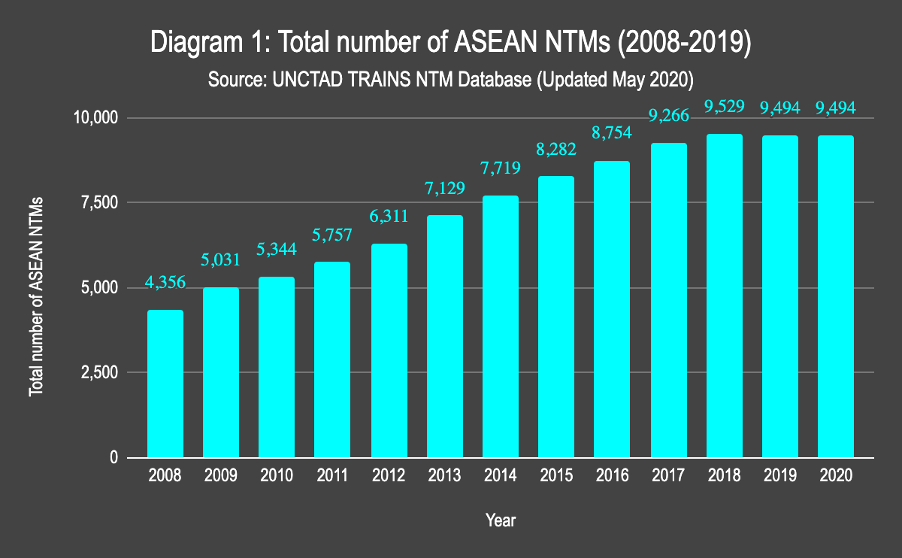 As an economy develops and matures, it tends to introduce measures to safeguard the country’s safety and public health. Increased NTMs in turn attract trade costs, and in some instances become trade-distorting barriers, called the NTBs, to unfairly favour domestic businesses.

While ASEAN should be committed to reducing NTM and therefore the associated compliance costs, firstly, I would suggest that ASEAN moves beyond the headline numbers of total NTMs.

The frequency and the coverage ratio of such measures being applied are critical dimensions that are usually lost in the mainstream narrative on NTMs. For example, Thailand took the top spot by measuring the total NTMs, yet Lao PDR’s NTMs had the most coverage and frequency. 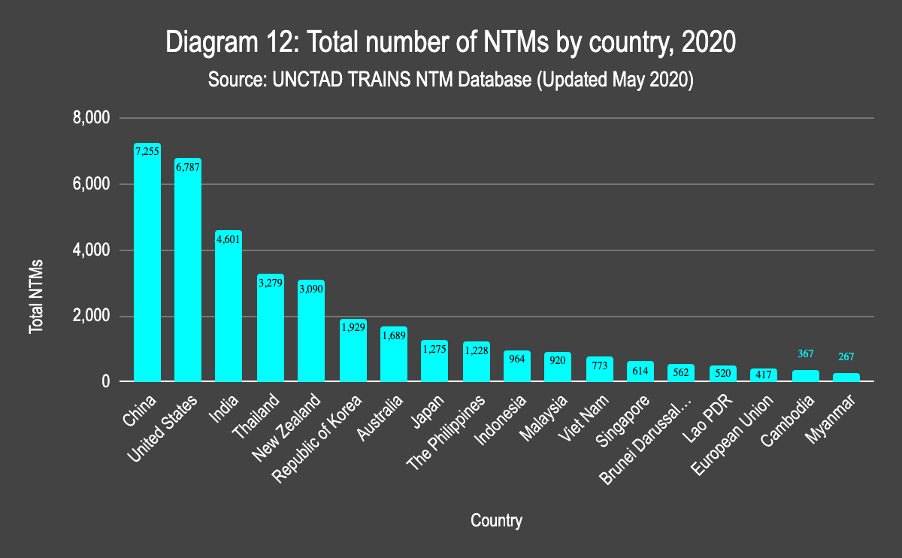 Secondly, the picture is equally incomplete if only the combined total of the NTMs among ASEAN countries is reflected. Data comparing “individual” ASEAN members with trade partners clearly shows that China, the US, India, New Zealand, Australia and Japan are ahead of ASEAN (except for Thailand) and are all “equally guilty” by NTM counts.

The revelation suggests that while ASEAN should at least be motivated to remove NTMs that are associated with compliance costs, it is a much complex picture when it comes to negotiating with dialogue partners where reciprocity is required.

Notably, the then 28-member European Union had a commendable 417 combined NTMs and is the gold standard that ASEAN should emulate, although we are cognizant of the fact that the EU’s economic integration is far deeper than what ASEAN has committed to achieving.

Brunei as the Chair of ASEAN in 2021 has demonstrated determination by making the “assessment of streamlining NTMs” as its first Priority Economic Deliverable (PED). But the key lies in having enough political will, a tired theme no doubt, at all levels across ASEAN to pursue this goal as a shared priority, more so in the COVID-19 stricken economic environment.

The Guidelines for the Implementation of ASEAN Commitments on NTMs on Goods and the ASEAN Solutions for Investments, Services and Trade (ASSIST) have yielded dismal results or low usage. ASEAN is now on to develop yet another mechanism that will assess the cost and effectiveness of existing NTMs, called the NTM Toolkit.

Unfortunately, these efforts do not take the bull by the horns.

The unplanned ASEAN Summit in Jakarta on May 24th that gathered all leaders of ASEAN in person except Thailand and the Philippines demonstrated that ASEAN is capable of being responsive and breaking the norms and protocol when it needed to rise above the circumstances. Then it beckons the question of what does it take for ASEAN to finally arrive at a breakthrough in the NTM issue. if a pandemic did little to achieve much?

Given that the AEC 2025 Blueprint is a “living” document with periodical reviews, here lies the opportunity for intervention.

First, we must recognise that large scale removal of NTBs is impossible. Realigning expectations and resetting the targets by breaking them down to achievable smaller milestones is not an option. Even if committing to removing one NTB per AMS would be more ambitious than resolving two actual cases of NTM complaints as a target for 2021. A tiered or phased approach should be considered too.

Second, in consideration of the greater volume of NTMs imposed by trade partners on ASEAN who also call for reduction of ASEAN NTBs, it is of extreme importance that reciprocity should be demanded. However, current consultative channels within ASEAN are less designed to address NTM issues with ASEAN’s trade partners who also impose NTMs on ASEAN resulting in the policy stakeholders involved with ASEAN plus one bilateral trade missing in the consultative process. Once such a channel is established, ASEAN trade partners too should commit to the removal of NTMs in reciprocating ASEAN’s effort accordingly.

The cost of inaction is greater

If ASEAN truly aims to measure the success of the AEC, the NTB removal aspiration is one such thorny area that should be used as a critical benchmark, even if it means revising to a more realistic target. ASEAN cannot afford to move the existing targets en bloc to yet another 10-year blueprint by the end of 2025 with the action line being carried forward. The cost of lost opportunities as ASEAN rebuilds itself is greater if ASEAN did nothing.

If ASEAN does not take its commitment seriously, why should others?