ASEAN: Last In, Last Out 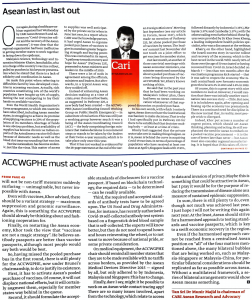 Once again, during a healthcare webinar organized last Wednesday by CARI Asean Research and Advocacy on “Covid-19 Vaccine Rollout and the Recovery of the Asean Economy”, it was so clear that the regional organization has been ineffective in getting member states to work together in facing down the epidemic.

Malaysia’s Minister of Science, Technology and Innovation, Khairy Jamaluddin, who is in charge of the country’s vaccine roll-out, pulled no punches in his keynote presentation when he stated there is a lack of solidarity and coordination in Asean.

He made this point when referring to difficulties faced by less developed countries in accessing vaccines. Actually, rich countries constituting 14% of the world’s population have bought up 53% of supply, leaving the rest scampering to lay their hands on available vaccines.

Even the WHO’s COVAX arrangement to which 192 countries have subscribed, including Asean member states, is struggling to achieve its promise of supplying 20% of the population of its members. Shortage of funds is one obvious problem, but availability of supplies has become chronic as Indian exports of the Astra Zeneca vaccine fell off because of domestic needs as well as the blood clot issues surrounding that vaccine. 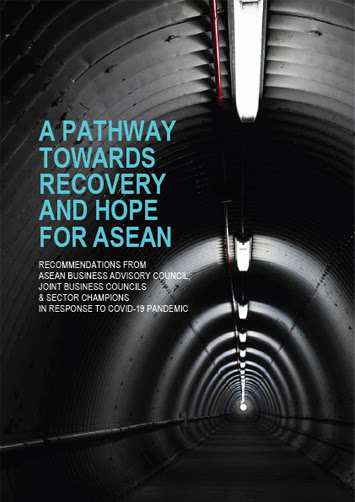 Vaccine nationalism has become endemic, just like the virus. This matter of access to supplies was well anticipated by the private sector when in June last year in a report where CARI was the knowledge partner, it had urged Asean to organize pooled purchases of vaccines to give its members greater bargaining strength and buying power. This was contained in its report “A Pathway Towards Recovery and Hope for Asean” (Pathway 225) presented to Asean ministers and leaders in the middle of 2020.

There were a lot of nods in agreement among the officials, ministers and leaders but afterwards, in typical Asean way, they nodded off.

Instead of enhancing Asean decision-making at a time of crisis, even if on an ad hoc basis, as suggested in Pathway 225, a new body had been created, the ACCWGPHE (Asean Coordinating Council Working Group on Public Health Emergency) in substitute of real action. This was a working group however much it was a being of the Asean Coordinating Council (ACC), the body comprising foreign ministers which makes decisions to recommend steps or stands to be taken by the leaders at their twice a year summits which this year is to take place only once.

That it has not worked is evidenced by the 28-page statement at the end of the Asean Foreign Ministers’ Meeting last September (see my article in Forum, The Edge Malaysia Weekly, September 14-20 2020), which made no mention of Pathway 225, let alone pooled purchase of vaccines by Asean. Thus the leaders summit in November did not touch on a joint effort to get vaccines for member states.

Just last month, at another of those convivial meetings with Asean Economic Ministers, one minister mumbled something about a pooled purchase of vaccines being discussed by the ACCWGPHE. Yet, Malaysia’s supremo on its vaccine roll-out, Khairy Jamaluddin, knows nothing of this.

He said that in the past year that he had been working on Malaysia’s roll-out plan, there had been no Asean communication whatsoever of that supposed discussion on pooled purchase. He was quite clear that he would not wait upon Asean which, as we have noted again and again, just talks and talks, gets behind the clock, and talks some more.

In his own words, with which I entirely agree, Asean does not have the institutional mechanism to make decisions. That is why I had specifically put in Pathway 225 for there to be established that decision-making body – at least at a time of crisis.

Khairy had suggested that the private sector took over in making things happen. However, we can but only as allowed by Asean bureaucracy – and up to the border.

Thus it is that Asean is behind the curve in acquiring the Covid-19 vaccines, and in terms of percentage of population who have received at least one dose as of 5th April 2021, with Singapore (17.95%) far in the lead, followed distantly by Indonesia (3.16%), Malaysia (1.57%) and Cambodia (1.37%), with the others trailing some distance back.

The above figures were provided by Dr. Khor Swee Kheng, a leading independent health policies specialist, who was a discussant at the webinar.

Minister Khairy, on the other hand, highlighted the Israeli success story in vaccine roll-out and recovery of the economy, the best record in the world. With nearly 90% of those over 50 vaccinated or recovered from Covid-19, it was decided on 7th March, less than 2 months after the vaccination programme kickstarted, it was safe to re-open the economy. The Israeli central bank forecasts economic growth in 2021 of 6.3% and in 2022 of 5.8%.

Of course this is a great story and nice numbers to look at. However I would caution there is also another vaccination rate success story, Chile, which is in lockdown again, after opening and freeing up too prematurely. There is continued need for discipline, in the new normal often referred to but in reality most people wish to disregard.

Indeed, Dr. Khor Swee Kheng put across a number of cogent points, which should set Asean thinking, planning – and acting. He still emphasized vaccine supply which should cause Asean to want to be better late than never with pooled procurement, but added regional manufacturing. It is to be hoped if the latter takes off, there will not suddenly be non-tariff measures suddenly surfacing, unimaginable, but never impossible with Asean.

Even with vaccines, Dr. Khor advised, there should be a variant strategy – maximum suppression and genomic surveillance. Again, this is something the ACCWGPHE should already be thinking about and fashioning cooperation for.

Finally, on restarting the Asean economy, Dr. Khor took the view “vaccines are not a magic strategy”. He believes antibody passport are better than vaccine passport, although most people would say both would be best.

So, having missed the pooled purchase bus in the first round, there is still plenty for the ACCWGPHE, now under Brunei’s chairmanship, to do to justify its existence.

First, it has to activate Asean pooled purchase of vaccines. Of course it will not displace national efforts, but it would certainly augment them, especially for member states way behind in the queue.

Second, it should formulate the acceptable standards of disclosures for a vaccine passport. If based on blockchain technology the required data – to be determined – can be readily available.

Third, the required and accepted standards of antibody tests have to be agreed upon. The US FDA, for instance, have just recently authorized a Covid-19 self-collected anti-body test system based on a fingerstick dried blood sample that is self-collected. The experts will know better but they do not need to spend hours and hours reinventing the wheel, or to not want to move because of national pride, or some private consideration.

Medical equipment, the ACCWGPHE chair should remind all member states, are to be available with no tariffs across borders, as provided by the Asean Medical Devices Directive 2015 signed by all – but only adhered to by Indonesia, Malaysia and Singapore. This has to change.

Finally, dare I say, might it be possible to work on an Asean-wide contact tracing app? There are so many issues involved, apart from the technology, which relate to access to data and invasion of privacy. As I have said before, it could be every would-be dictator’s wet dream. Maybe this is something that could be attractive in Asean. I pray it would be for the purpose of reducing transmission of disease alone as a measure of sustained epidemic suppression.

In sum, there is still plenty to do although not much was achieved last year. I just hope I will not be writing this again next year. At the least Asean should strive for a harmonized approach to testing standards and vaccines passports, which is key to swift Asean economic recovery.

Even if the harmonized approach cannot be reached from a centralized Asean position on ALL of the above four matters, the many bilateral bubbles that are being worked on, such as Malaysia-Singapore or Malaysia-China, for particular bilateral considerations, should be replicated as far as possible across Asean. Without a multilateral framework, a series of bilateral arrangements would show Asean means something.