Rediscovering ASEAN Growth: another good reason for a common market

There are many good reasons to have a common market for ASEAN countries. Especially right now.  A common market may also be essential if member countries are to rediscover robust growth. ASEAN’s bread and butter have always been external trade but it appears to be in a cyclical and structural slowdown. The onus then falls on domestic demand but stimulus is difficult to administer and its effect is not very clear. While interest rates are low, the transmission mechanism of monetary policy appears to be impaired and credit growth is sluggish. Fiscal policy has some self-imposed limits but, in any case, the domestic markets for domestically-produced goods are small. Together though, it is a large market and it may provide the answer to the “domestically-led” growth.

Global growth is currently struggling – the US has grown at just above 1% for the last year; Japan and Europe have their own issues and China is slowing. However, what matters for ASEAN is not global growth per se but trade and financial flows. And here, the news is not good. Over the last 12 months, on a year-on-year basis, almost every country has posted negative export growth in US$ terms.

The reasons for trade slowdown are both cyclical and structural and, in my view, neither is likely to improve soon. On the cyclical side, the problem is the continued sluggishness of business investment, the more import-intensive component of GDP. Relief is not close, as a pick-up would require higher return to investment and that is unlikely to materialise until there is a sustained rise in other components of demand.

The structural side possibly poses greater danger. In the 1990s, a 1% rise in global income caused trade to increase by 2.2%; it is now close to 1%. As such, in G3 countries, the share of imports in GDP is declining. Thus, even if global growth picks up, trade may not pick up much.

Several factors have been identified but the most commonly-cited one, and the most likely cause, is the evolution of supply chains.  In the 1990s, as global supply chains were being set up and industrial production was becoming more fragmented, there was a natural increase in trade flows, featuring raw materials and intermediate goods.

That has now changed and with supply chains maturing, trade elasticities have declined. Increased protectionism and squeezed trade finance are other possible causes of the decline. For Asia though, the main reason is China’s declining need for imports.

Firstly, Chinese economic growth is slowing and that means less imports. Secondly, it is rebalancing towards consumption demand and away from investment, as it is less import-intensive than investment. Thirdly, even within consumption, additional demand is increasingly directed towards services and that tends to be more domestically oriented.

However, the biggest change is in how China produces and trades.  It established itself as the terminal point in a supply chain, where intermediate goods were imported, and things were assembled, packaged and shipped abroad. The domestic value added was low and the imported content was high.

Two other things have changed: 1) China’s production is moving up the value chain, and 2) domestic inputs are starting to substitute imports. Its move up the value chain is helping countries such as Vietnam and Cambodia who are picking up China’s share in global markets for products such as footwear and garments. But the change in China’s production structure is hurting other ASEAN countries. Imported parts and components have become a much smaller share of Chinese merchandise exports, going from over 50% at the start of 2000 (and 60% at its peak) to close to 35% today. Domestic value added for Chinese exports is increasing and thereby, reducing trade flows. 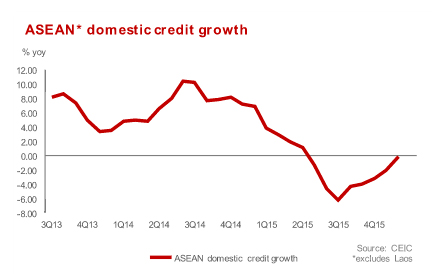 With little help from trade, the economic growth outlook for Asia, and ASEAN, will come down to domestic demand, which in turn will depend on how stimulative government policy is.

Rates are being reduced nearly everywhere. Indonesia has taken the lead with four cuts totalling1 00 basis points. The Philippines has not changed stance but rates are operationally lower in its interest rate corridor. Singapore has moved its policy stance to neutral, which is loose by typical Monetary Authority of Singapore (MAS) standards. Recently, Bank Negara Malaysia (BNM) cut rates by 25 basis points and I believe the Bank of Thailand (BOT) should, though it may not, follow.

The more important question is, will these lower rates revive the economy? Our belief is that the impact is likely to be limited as the transmission mechanism is impaired. Credit growth has remained poor despite easing. To some extent this was due to sluggish economic activity. In other cases, consumer debt was the binding constraint.

This leaves fiscal policy, and we are likely to see the most action in Indonesia and Thailand, with the former being the most active. The Indonesian government has announced 13 policy packages aimed at economic restructuring and more are expected. Thailand has targeted infrastructure. However, both these countries (and Malaysia) are constrained in their use of fiscal policy, due to self-imposed limits on government debt or the fiscal deficit.

Even without these limits, fiscal policy will have limited impact as most ASEAN countries spend a fair amount on imports, which is a “leakage” and mutes the second round multiplier effects of stimulus. But with a more integrated common market, that leakage is contained and stimulus has a bigger impact. In the current global environment, that would be very useful.