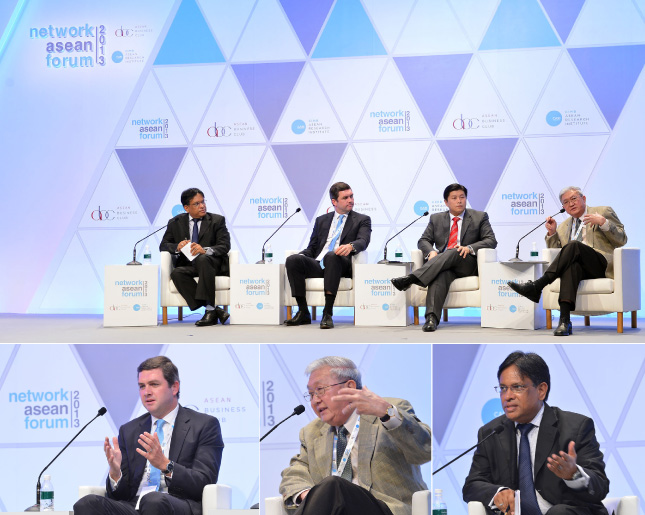 What are the other drivers of growth in ASEAN?

As a total of 75% of trade in ASEAN is outward based, there is more that can be done to increase intra-ASEAN trade and investment. As ASEAN prepares for the formation of the AEC, many industries will face challenges to integration. The importance of the automotive, shipping and food manufacturing industries cannot be denied driven by improving economies, more disposable incomes and economic integration.

ASEAN offers strong growth potential for the automotive market. Three and half million cars were sold in ASEAN in 2012. If ASEAN as a cluster plans and manages the evolution of the automotive landscape well, it could contribute to the creation of more jobs in the region and revenue for governments.

With a population of 600 million, there is opportunity to grow. Passenger vehicle segments are likely to dominate the market. Two countries will rise as major players in the automotive industry. Indonesia will emerge as a largest player in the region with a 20% average growth a year. Thailand, a major automotive producer in the region and top 10 globally will benefit from having established itself as a manufacturing hub and supplier of auto components. Indonesia will also thrive from a growing domestic market.

ASEAN’s economic and trade unity will create a major automotive hub as local governments will compete for investments. However, in order to truly leverage on the opportunity, the automotive industry landscape must be dissected from its building and manufacturing to distribution, retail, automotive and insurance.

The automotive industry will have some obstacles to integration. Technical standards across the region will have to be streamlined. In order to create more cost efficiencies, custom processes must also be streamlined. Whilst the standardisation of 40% local content is clear, the question on what constitutes local content remains unclear. Until these policies and standards are integrated, ASEAN is still a long way off from becoming an automotive hub.

During the 10th ASEAN Ministerial Meeting in 2004, the ASEAN Transport Action Plan was adopted. The Maritime Transport Goals (MTG) of the Maritime Roadmap are aimed at creating a more efficient and competitive regional maritime transport sector and achieve globally acceptable standards in maritime safety and security and protection of marine environment.

The main thrusts of the Maritime Roadmap are to:

At the 10th ASEAN Ministerial meeting, 48 actions were outlined in the ASEAN Transport Action Plan. These actions were aimed at helping ASEAN countries develop a single ASEAN voice in the international maritime area, develop infrastructure, allow for market integration through development strategies for an ASEAN Single Shipping Market (ASSM) and achieve market integration through development strategies for human resources development in the sector.

The 13th ASEAN Summit declaration on ASEAN Economic Community Blueprint emphasized the need for the Maritime Sector to implement relevant International Maritime Organisation (IMO) Conventions and implement the Roadmap towards an integrated and competitive Maritime Transport in ASEAN.

Therefore, there has been a steady roll out and preparedness towards AEC 2015 in the shipping sector and towards achieving the Maritime Transport Goals. Specifically, eight action plans are underway with five key deliverables for 2013 covering the:

In summary, there is already a clear regional roadmap for the integration of the shipping industry in ASEAN. The bulk of the standards, policies and measures have been identified and realised. However, more needs to be done to attempt real significant commercial co-operation in ASEAN Maritime Development. ASEAN must focus on becoming a more dynamic and competitive player in regional and global supply chain. For this to take place, it will need political will and more thorough economic integration.

Food Manufacturing The food manufacturing sector has many areas for integration, alignment and harmonisation. The two key areas are food manufacturing standards and quality and trade certification. While these are gradually taking place, these changes must move faster as they are currently impeded by local and national level standards. Food standards between countries, if not harmonised, will pose a major technical barrier to trade and will impede investments, increase manufacturing costs and stunt the overall potential of the food sector in the region.

Four key drivers in the food manufacturing industry are; establishing production chains and bases, demand centres, investment models and value chain creation. The development of production bases in ASEAN will be a major pillar in the evolution of food manufacturing in ASEAN. Countries will have to change its production from vertical bases to integrated horizontal production and supply chains regionally. For example, rice that is grown in Myanmar, will be processed in Thailand and perhaps be processed further into value added food products in another ASEAN country.

With economic integration, the industry can expect more intra-ASEAN demand centres and investment. Value creation in food manufacturing in ASEAN will be driven by the growing middle class in ASEAN. Therefore, higher quality food products will no longer only be concentrated for export beyond ASEAN but also for domestic and intra-ASEAN consumption. Harmonisation within ASEAN will also mean more movement of human capital in the sector which will help drive innovation and knowledge building in less developed food manufacturing markets in the region.