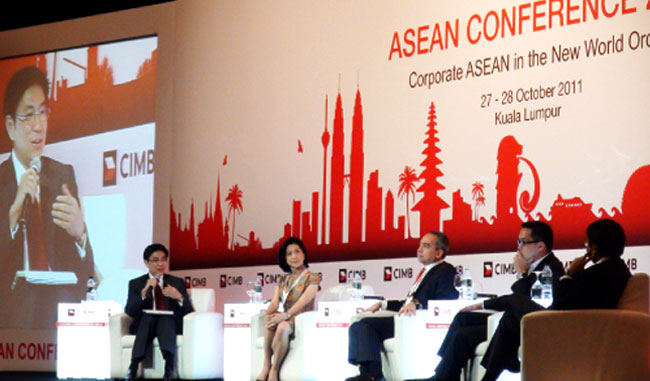 ASEAN businesses need to change their mindset and governments should play a more active role in breaking down barriers to cross-border trade, according to panellists at a plenary session entitled, “Realising AEC 2015 – the Role of Corporate ASEAN”. The session was held in conjunction with the inaugural CIMB ASEAN Conference on 27 October 2011.

Themed “Corporate ASEAN in the New World Order”, the conference was an opportunity to listen to the perspectives of the region’s most influential policy makers and corporate captains on ASEAN’s prospects as a new economic force and how they stand to benefit from the high levels of growth in the region.

Cross-border trade in ASEAN still face constraints, according to Nazir. “I think that is one of my biggest frustrations”, he stressed. ASEAN, he added, needed to give substance to the fact that “we are one region”, and support ASEAN companies venturing across borders.

Lacking that support, Nazir has spearheaded the formation of the ASEAN Business Club (ABC). ABC will facilitate between corporates and ASEAN governments and also provide networking opportunities for business leaders.

Nazir outlined the vision of the ASEAN Economic Community (AEC) as building ASEAN as a global hub and promoting ASEAN ownership of regional companies. “We want to help create national interest in ASEAN”, he said, adding that “we need to ask the hard questions about AEC 2015 now. Without preparation, ASEAN integration will be pushed back”.

Indonesia’s relative economic openness as a result of the Asian financial crisis has led to a sense of revival in the country, Walujo said. However, Indonesia’s corporates do not look beyond the domestic market and needed to be shown the clear advantages of embracing market openness, he added. Indonesia has also seen an increase in overseas competition in certain sectors, like automotive.

Singapore’s companies are too Western-centric in outlook and approach, according to Chew. “With that legacy, we now find it easier to do business with the West because we have learned to adapt to their cultures and practices,” she said. Despite ASEAN’s potential, Singapore needed to learn from scratch on how to do business with its ASEAN neighbours, she added. Chew said the current financial crisis in the West will be an impetus for Singaporean companies to look to ASEAN, “simplybecause anybody who is doing business can see the long-term potential.”

While ASEAN integration is a good thing, how winners will compensate losers has to be addressed too, according to Consing. ASEAN could also learn from Europe’s mistakes. “We have the opportunities to learn from those mistakes and I think the model here should be better because it is more confined, it is within a smaller geographic region”, he explained.