Mr. Joydeep is a Director in McKinsey & Company and leads the Asia Banking practice, based in Singapore. He has served leading financial institutions in Asia and Europe.

Joydeep has deep expertise in a range of business areas including retail banking, wholesale banking and organization-related topics. He has worked with Asian banks and insurers on business unit strategy, service operations, risk and regulation and sales excellence and channel management.

His recent work includes supporting the performance transformation of several leading banking groups in Asia with a focus on sustainable change management and helping with bank and banking sector restructuring issues facing Asian banks. He is currently a member of several policy-making groups in Asia on financial sector and capital market reform issues.

In addition to serving clients, Joydeep has authored several publications in the areas of asset management, banking reform, economic crisis and infrastructure development. Prior to McKinsey, Joydeep held several managerial positions with HSBC.

Joydeep holds a Post Graduate Diploma in business management from Indian Institute of Management, Ahmedabad and a Bachelor of Commerce from the University of Delhi.

Tan Sri Dato’ Seri Ranjit Ajit Singh was appointed as the Executive Chairman of the SC on 1 April 2012. He has extensive experience in the field of finance and securities market regulation and has spearheaded many key initiatives in the development and reform of Malaysia’s capital market. He was appointed the Vice-Chairman of the governing Board of IOSCO and is the Chairman of IOSCO’s largest Committee, the Growth and Emerging Markets Committee. In 2014, Tan Sri Dato’ Seri Ranjit was appointed Chairman of the ASEAN Capital Markets Forum (ACMF). Tan Sri Dato’ Seri Ranjit chairs the Securities Industry Development Corporation (SIDC), the Malaysian Venture Capital and Private Equity Development Council (MVCDC) and the Capital Market Development Fund (CMDF). He is also the Vice-Chairman of the Asian Institute of Finance and a Board member of the Labuan Financial Services Authority and the Financial Reporting Foundation as well as a board member of the Malaysian Institute of Integrity (IIM).

Dato’ Sri Nazir Razak is the Chairman of CIMB Group Holdings Berhad. He joined CIMB’s corporate advisory department in 1989 and served the Group in various capacities before being appointed Chief Executive in 1999. After 15 years as Chief Executive, Nazir became Chairman on 1 September 2014. He spearheaded the Group’s transformation from a Malaysian investment bank into an ASEAN universal bank via several acquisitions and new builds throughout the region.

Today, CIMB is Malaysia’s second-largest financial services group and ASEAN’s fifth-largest by assets. Backed by a staff force of around 39,000, the Group has operations in 15 countries, but positions itself as an ASEAN franchise. Under Nazir’s stewardship, CIMB has won many awards, including best investment bank and best Islamic bank in Asia and best bank in Malaysia. Nazir himself was recognised as Malaysia’s top executive/CEO on several occasions. He was the youngest recipient of FinanceAsia’s ‘Lifetime Achievement Award’ in 2009 and was awarded Euromoney’s ‘Outstanding Achievement Award’ in 2012. In 2015, he was the recipient of Asia House’s ‘Asian Business Leaders Award’.

Nazir is a Director of Khazanah Nasional Berhad and a member of the International Advisory Board of the Blavatnik School of Government at the University of Oxford. A strong advocate of the ASEAN integration, Nazir is the inaugural Chairman of the World Economic Forum’s ASEAN Regional Strategy Group and ASEAN Regional Business Council. He led the establishment of the ASEAN Business Club, which comprises CEOs of large ASEAN multinationals, and the CIMB ASEAN Research Institute. He is also a Founding Board Member of Endeavor Malaysia, a non-profit organisation that helps spur the development of entrepreneurs, and was instrumental in the formation of CIMB Foundation, the Group’s corporate responsibility arm. He is also the Honorary President of the Malaysia-China Chamber of Commerce and a member of the Advisory Board of the Centre for Asian Philanthropy and Society.

Bambang Irawan is a Senior Research Fellow with the CIMB ASEAN Research Institute (CARI). In his capacity, he has provided analyses on the new AEC Blueprint 2025 from the point of view of the stakeholders, particularly the private sector, as well as on the latest policy developments in Indonesia. Bambang was formerly an Assistant Director at the ASEAN Secretariat, Jakarta, Indonesia. His portfolio covered cooperation and initiatives under the ASEAN finance integration. He coordinated activities and initiatives under financial services liberalisation, capital account liberalisation, capital market development, insurance and taxation.

With the completion of ASEAN Economic Community (AEC) Blueprint 2015, Bambang was involved in the development of the AEC Blueprint 2025 that would guide the cooperation and integration of all economic sectors in ASEAN between 2016 and 2025. His professional experience includes the banking sector and higher education, where he taught economics, statistics and ASEAN studies. Bambang earned his undergraduate degree in economics from the University of Indonesia and MBA from Webster University. His doctorate (economics) is from Monash University, Australia.

Tan Sri Dr. Munir worked in the UK as a university tutor and research analyst in the City before returning to Malaysia at the end of 1978, to be leader writer for the New Straits Times. He progressed to the position of Group Editor before leaving in 1986 to become Chief Executive Officer of a small merchant bank Pertanian Baring Sanwa, whose name he changed to Commerce International Merchant Bankers (CIMB), which was then transformed into one of Malaysia’s leading merchant banks. In 1993, he was invited by the Government of Malaysia to establish the Securities Commission, where he served as Executive Chairman for two terms until 1999. He was instrumental in shaping the legal and regulatory framework of the capital markets in Malaysia, particularly in establishing disclosure-based regulation. He was also responsible for drafting the country’s first code of corporate governance in the aftermath of the Asian Financial Crisis of 1997-98. He was Chairman of the Emerging Markets Committee of the International Organisation of Securities Commissions during his term at Malaysia’s Securities Commission. After leaving the Commission, he became Director of Telekom Malaysia Berhad, Chairman of Celcom (Malaysia) Berhad and Chairman of Malaysian Airline System Berhad. He was the Founder President of the Kuala Lumpur Business Club, established in 2003 and is a member of the Court of Fellows of the Malaysian Institute of Management. He is currently Chairman of Bank Muamalat Malaysia Berhad, CIMB Asean Research Institute, the Asean Business Advisory Council, Malaysia and The Financial Services Professional Board Malaysia (FSPB), as well as President of the Asean Business Club.

Tan Sri Dr. Munir obtained a B.Sc (Econ) and Ph.D in international relations from the London School of Economic and Political Science (LSE) in 1971 and 1978. He is an Honorary Fellow of LSE and continues the long association with his alma mater as Visiting Senior Fellow at the Centre of International Affairs, Diplomacy and Strategy. Tan Sri Dr. Munir is an associate of Southeast Asia Centre (SEAC) at LSE. 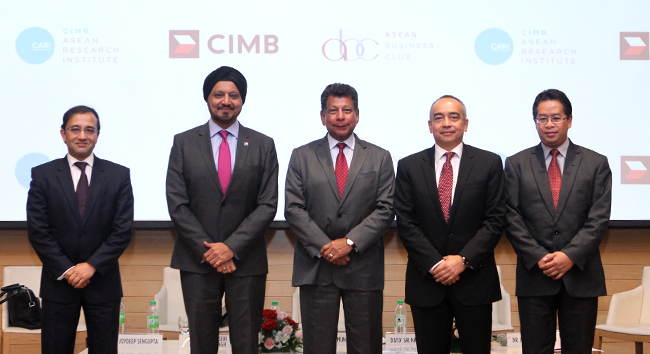 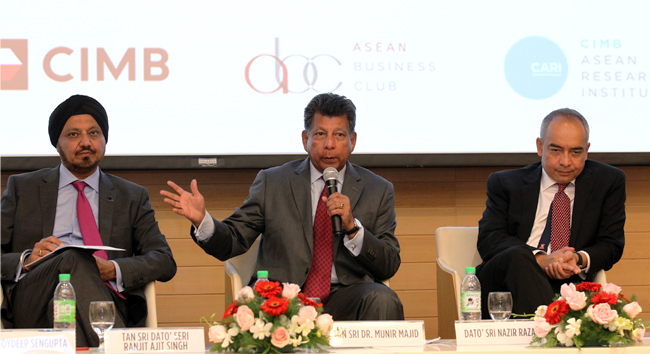 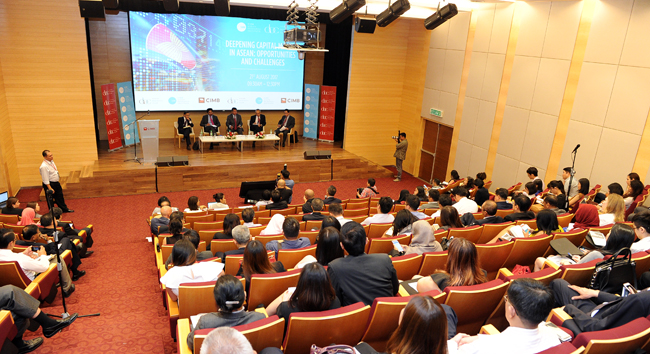 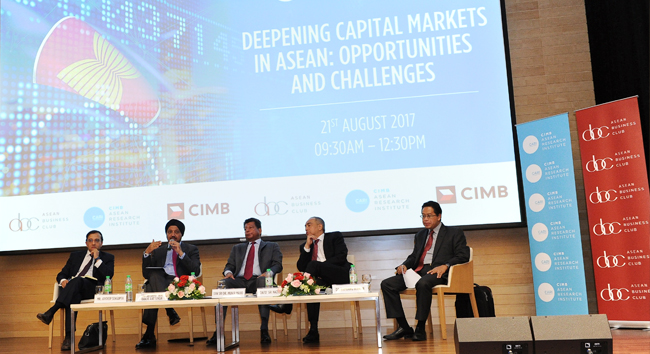 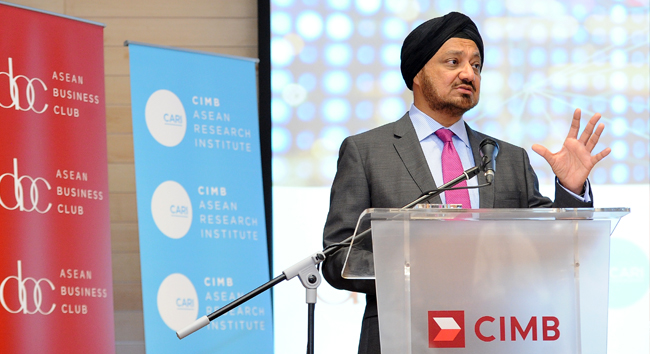 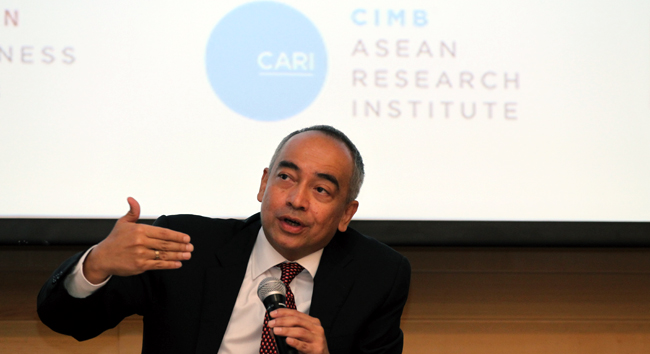 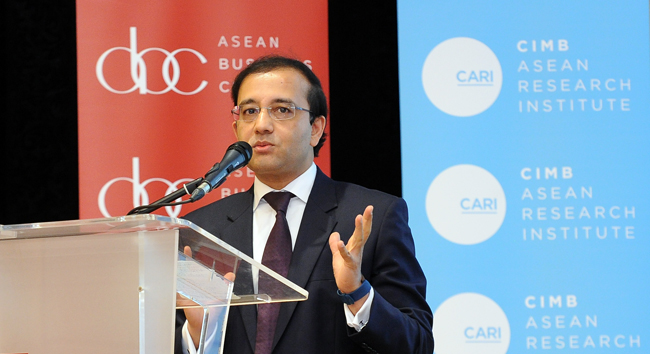 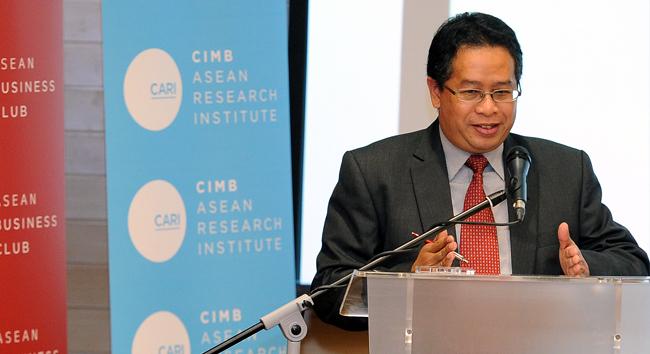 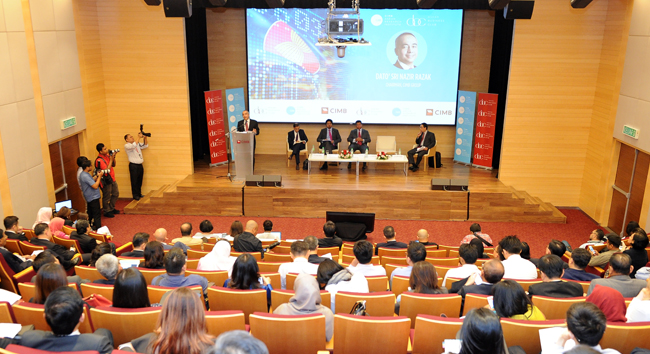 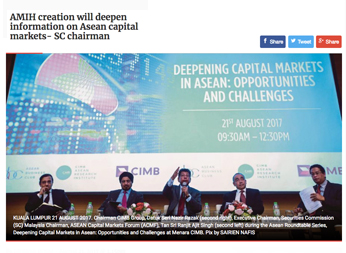 KUALA LUMPUR: The Securities Commission has called for the creation of an Asean Markets Information Hub (AMIH), which could be used towards further deepening of the region’s capital markets.

Executive chairman Tan Sri Ranjit Ajit Singh said there are a myriad of issues that stand in the way of a total Asean capital markets integration and the lack of information is a big portion of that.

“We need to bring together an AMIH, where regulators and the industry themselves put together research and information of their capital markets and big corporates,” he said this morning at CIMB Asean Research Institute (CARI)’s Asean Roundtable Series…

21 August 2017
As appeared in theSundaily 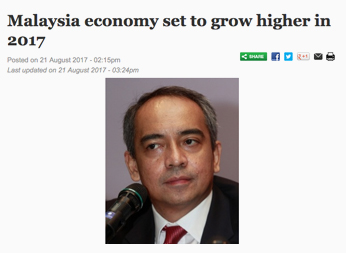 Nevertheless, he said, the cautious global economy growth in the second half of this year would provide a limit to the upside trajectory, he said…

21 August 2017
As appeared in theSundaily 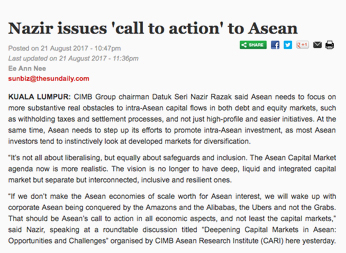 KUALA LUMPUR: CIMB Group chairman Datuk Seri Nazir Razak said Asean needs to focus on more substantive real obstacles to intra-Asean capital flows in both debt and equity markets, such as withholding taxes and settlement processes, and not just high-profile and easier initiatives. At the same time, Asean needs to step up its efforts to promote intra-Asean investment, as most Asean investors tend to instinctively look at developed markets for diversification…