Victoria Treadell (also known as Vicki) was appointed the British High Commissioner to Malaysia in October 2014.

Vicki joined the UK’s Foreign & Commonwealth Office (FCO) in 1979. She was formerly the British High Commissioner to New Zealand and has previously served in India, Pakistan and Malaysia. During her postings in New Zealand and Mumbai, she built on the bilateral relations and business links, looking after British people caught up in the Mumbai terrorist attacks and the Christchurch earthquake; at the same time working with the Indian and New Zealander authorities in dealing with the respective crises.

Her FCO career has further covered a wide range of other policy and service delivery roles including three years as UK Trade and Investment’s Director for the North West of England.

Vicki was made a Member of the Royal Victorian Order (MVO) in 1989 and a Commander of the Order of St Michael and St George (CMG) in 2010. In 2009 she won the Public Sector Award in the UK’s prestigious Asian Women of Achievement Awards. Born in Malaysia, Vicki received her early education at Tarcisian Convent, Ipoh before moving to the UK where she studied in Bexhill College and took up an International Affairs course at London School of Economics. In February 2016, Vicki was awarded a University of Reading Honorary Degree of Doctor of Laws.

Dato’ Steven Wong (Steve) is Deputy Chief Executive of the Institute of Strategic and International Studies (ISIS) Malaysia. He has worked in the public policy arena for 25 years, twenty of which has been with ISIS Malaysia, and has also spent eight years in the private sector where he held positions in management consultancy, economic research, corporate finance and capital markets.

Steve has extensive experience in global, regional and national political economic affairs. He was Malaysia’s principal representative to the OECD’s Dynamic Asian Economies Dialogue (1989-92) and has been on the secretariats of two ASEAN eminent persons groups (1987 and 1992). He has also served the Malaysian National Committee for the Pacific Economic Cooperation Council (PECC) and is active in the Network of East Asian Think Tanks (NEAT), among others. Steve is ISIS Malaysia’s representative in the Asian Dialogue on Forced Migration (ADFM), a network of Australian, Indonesian, Thai and Malaysian think tanks that examines regional asylum seeker and refugee issues. The ADFM has made submissions to the Bali Process on People Smuggling, Trafficking in Persons and Related Crimes, the latest being a requested review of the 2015 Andaman Sea Crisis.

Steve is a columnist for the New Straits Times where he mainly writes on national unity and social cohesion. He received his undergraduate and postgraduate education in Melbourne, Australia and is married with two adult children.

Nick White is a partner based in Trowers & Hamlins office in Kuala Lumpur. Nick joined Trowers & Hamlins in 1980 and became a partner in 1987. His career has included time spent in Trowers & Hamlins’ litigation department in London, and spells in three Gulf jurisdictions – Oman, Bahrain and Dubai. Following numerous years of working with Malaysian clients on their activities outside Malaysia, Nick moved to Kuala Lumpur in July 2012 to head up the newly-formed representative Regional Office in an expansion to the firm’s international network. In April 2015, the firm became the first Qualified Foreign Law Firm to be licensed to operate in Malaysia.

Nick’s practice has involved him in a wide range of client activities. In addition to his substantial involvement in litigation and arbitration, he has acquired knowledge of the various laws and legal systems of other jurisdictions, across areas including real estate and construction, mergers and acquisitions, business set ups and structures, agency arrangements, and free zone advice.

Nick has been an experienced disputes resolution lawyer. He has been involved in many high profile cases, both as counsel and arbitrator – including under ICC, LCIA, DIFC-LCIA, and DIAC sets of Rules. 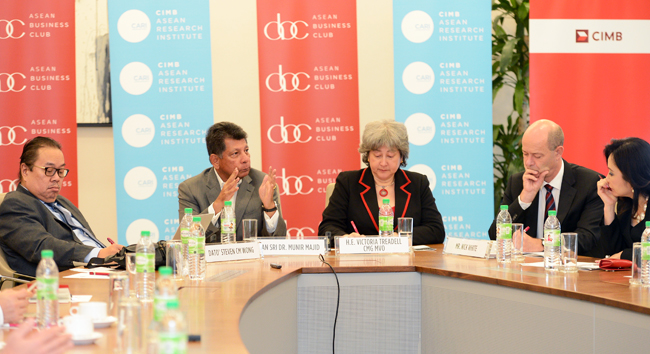 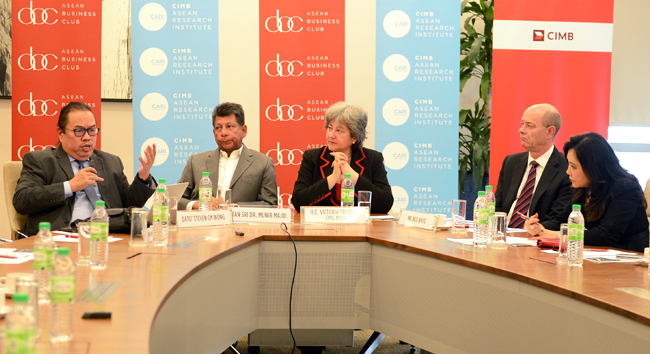 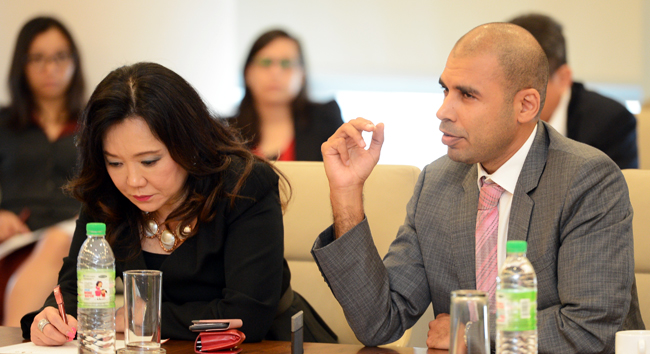 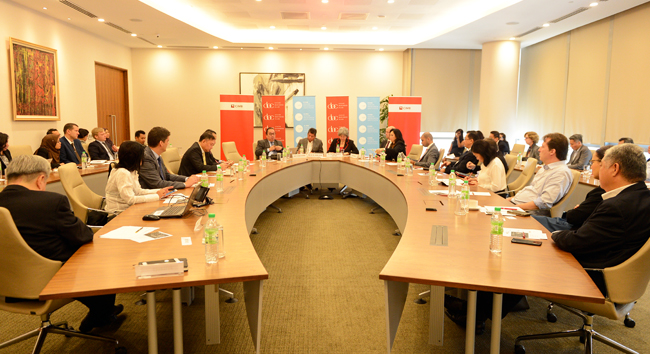 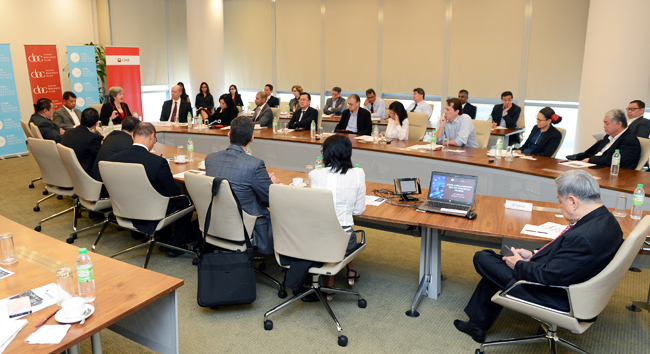 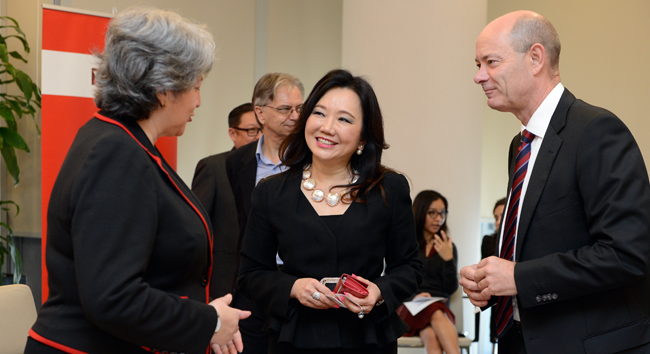 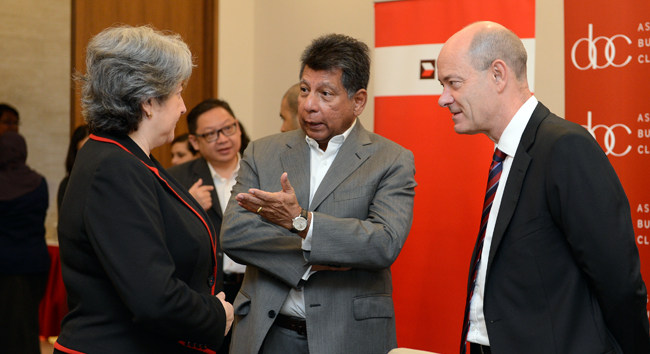 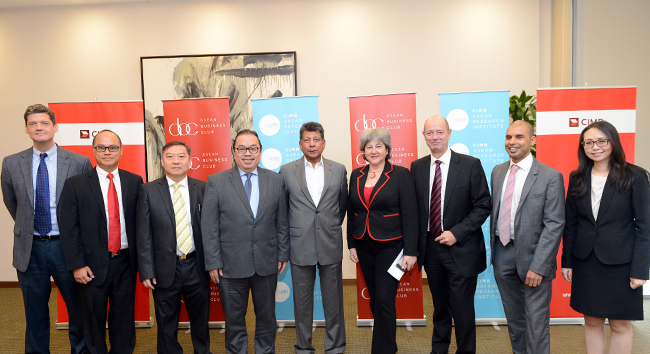 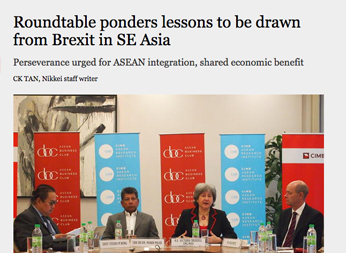 Roundtable ponders lessons to be drawn from Brexit in SE Asia

KUALA LUMPUR — Integration of Southeast Asian economies will fail in the absence of a shared vision, experts warned a business forum in Southeast Asia drawing on recent experience in Europe.

According to Victoria Treadell, the British high commissioner to Malaysia, Southeast Asian nations should learn from the U.K.’s forthcoming exit from the European Union if they want to avoid something similar in their own region.

The U.K. joined Europe’s common market in 1973, but the relationship expanded over the years beyond trade to include greater common governance and a single currency for the union’s other members, disenchanting many British voters…

21 April 2017
As appeared in Malaysian Business 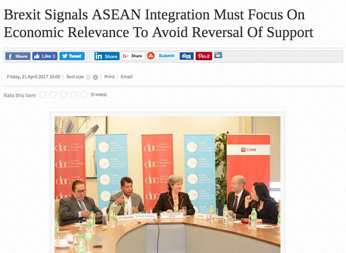 Kuala Lumpur, April 21- ASEAN should remain focused on its economic agenda and not let political issues cloud its vision of integration.

In view of rising protectionism globally, this was one of the key themes that emerged during a roundtable titled, “Lessons learned from Brexit: risks and opportunities for ASEAN?” which was organised by CIMB ASEAN Research Institute (CARI) yesterday, in collaboration with the ASEAN Business Club.

20 April 2017
As appeared in Malaysian Digest 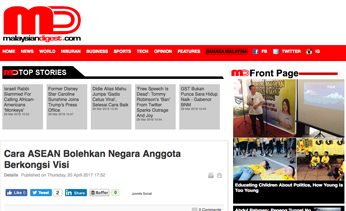