It is my honour to be invited today to this distinguished gathering of corporate leaders organised by the ASEAN Business Club to speak on the subject of financial integration in ASEAN. My remarks today will touch on our motivation for pursuing regional financial integration, the benefits to be gained from advancing this agenda and the different approach that is being adopted by ASEAN in comparison to that which has been pursued by Europe. I will also discuss the progress and future direction of this integration process, its future direction and the opportunities that this integration process will provide to the business community.

For more than three decades, ASEAN has sustained high economic growth. ASEAN is currently one of the fastest-growing and most dynamic regions in the world. According to the International Monetary Fund (IMF), economic growth in the region is expected to be sustained at an average of 5.3% over the next five years to reach USD3.6 trillion by 2019, five times the size it was a decade ago. Additionally, is also the significant increase in the middle class population in ASEAN. With a population of more than 600 million people, this trend will create a significant final demand in the global economy. This is reinforced by rising income in the region. Per capita income in ASEAN has almost trebled in this recent decade. ASEAN is therefore becoming a thriving hub in consumer demand. By 2020, ASEAN is estimated to contribute to more than half of the total global middle class population, representing more than USD2 trillion of new consumption within the region.

Main benefits of financial integration An intensification of financial integration in ASEAN will not only serve to enhance growth at the national level, but also act as a catalyst to achieve a growth that is mutually reinforcing for the economies in the region. Regional financial integration will bring about the more effective intermediation of funds and thus the efficient allocation of resources in the region. Excess savings in one country can be channeled into productive investments in another country within the region, thereby promoting growth. The ASEAN region has one of the highest savings rate in the world, at approximately 30%, as well as international reserves amounting to USD800 billion. The bulk of ASEAN’s surplus funds, however, are intermediated mainly through the international financial markets before being reinvested back into the region. In particular, more than 90% of cross-border portfolio investment flows are channeled to the advanced economies. Given the immense funding requirements that ASEAN has, particularly for large investment projects and infrastructure development, greater financial integration will facilitate channeling part of the region’s surplus funds towards productive investment opportunities in the region.

Regional financial integration will also allow for more efficient risk diversification of assets to include foreign assets from within the region. This will not only reduce vulnerability to external developments but will contribute to achieving more stable conditions in the regional financial markets. Additionally, this trend has been reinforced by greater coordination and cooperation among the regional Central Banks and regulatory authorities to safeguard financial stability. The collective actions that have been taken have enhanced the ability to manage and respond to risks confronting the region. Greater financial integration has also created an enabling environment for businesses. It has facilitated improved access to financing investments in the region. In particular, the presence of larger and increasingly more viable financial institutions in the region along with more developed financial markets have generated greater cross-border funding possibilities in the region and has allowed for more funding options for businesses. Further work in this direction is underway and significant progress on this front is expected to occur in this next decade.

Key distinguishing features of ASEAN’s model of integration While ASEAN may draw on the experience from the European model of monetary and financial integration, the region has charted its own path towards greater financial integration. In the European Union, the formation of a monetary union has represented a major element in realising their economic integration. The adoption of a single currency was a critical step in fostering the regional European integration. In contrast, a monetary union with a single currency is not the step forward for the ASEAN region. A study by the ASEAN Central Banks in the early 2000s concluded that a common currency should not be the direction to be pursued by the region, given that, the ASEAN economies did not have the preconditions to achieve such a union. Indeed, such preconditions would require significant and high costs to the region. This would make it a non-viable proposition. The ASEAN region represents one of the most diverse regions in the world in terms of size, economic systems and structures, stages of development, financial systems and prevailing economic and financial conditions. It was therefore concluded that rather than pursuing a strategy towards achieving a single currency and a monetary union, the region would instead be better served by greater regional financial integration to achieve the very same objectives of a greater shared economic prosperity for the region.

Another key difference between the European and ASEAN model of integration lies in the governance structure. In Europe, the monetary union is governed by a centralised institution, while the approach in ASEAN is to build on institutional arrangements and mechanisms that would facilitate financial integration while leveraging on a network of committees for the governance process. This is supported by agreements that have been and are being entered into based on commitments made by the respective members of ASEAN. Financial integration in ASEAN has also adopted a more flexible approach that accords the member countries to participate in the process based on their state of readiness. This is to ensure that no countries will be adversely affected by the process. Additionally, significant efforts have focused on capacity building in a range of areas of banking and finance to promote an inclusive advancement of the integration process in the region. Regional cooperation among policy makers is as focused in regional surveillance and information sharing. This is to facilitate greater understanding of regional issues as well as the detection of risks and vulnerabilities. It is also to provide awareness of the implications and the experience of alternative the policy options to address the wide challenging developments confronting the region. This has improved capability in managing the implications of external developments and potential economic and financial crisis.

What Businesses Can Expect In period following the Asian Financial Crisis, the region has made significant strides in strengthening our resilience, agility and capacity of the banking sector. We also now have the emergence of ASEAN financial institutions in the region. While ASEAN commercial banks predominantly mobilise funds at the national level, greater regional financial integration is now being paved for financial institutions in our region to participate in a regional banking network. The ASEAN Banking Integration Framework (ABIF), is now in its final stages of development. The ultimate objective of this initiative is to enable greater presence of ASEAN financial institutions to operate in the region to facilitate greater intra regional trade and investment activities. Businesses will thus stand to gain by having improved access to a larger and a more secure source of financing for such cross border trade and investment activities.

Headway has also been made in developing the capital markets in the region and to move towards greater financial integration of the markets. Over the recent decade, the ASEAN bond market has more than tripled in size to USD1.1 trillion. ASEAN Exchanges, a collaboration of seven stock exchanges within the region, was launched in 2011 to drive cross-border collaboration, streamline access, create ASEAN-centric products, and implement targeted promotional initiatives. In addition, the listing of ASEAN indices with the Financial Times and London Stock Exchange (FTSE) in 2005 has also enhanced the market visibility of the ASEAN exchanges, which represent close to 95% of the investable market capitalisation in the region and which has a combined market capitalisation of approximately USD2.9 trillion. This facilitates businesses in cross-listings between the exchanges and in raising funds given this common platform for ASEAN businesses.

Finally, ASEAN Central Banks and Monetary Authorities have long been involved in various regional cooperation initiatives to develop efficient, secure and reliable payment and settlement systems. For example, the inception of the Asian Payment Network (APN) seeks to create a new retail settlement mechanism for the participating states. It allows ATM cardholders to withdraw money in any of the other participating countries, thereby simplifying transactions. This could in due course contribute towards the growth of the tourism and the retail sector in our economies. With extensions being sought to include debit and credit cards, money transfers and mobile banking services, businesses will be able to leverage on these services to reduce transaction costs and improve efficiency for such transaction.

Let me conclude my remarks. Despite the distinct cultures, histories and languages that make each ASEAN nation unique, there is a common thread that runs through the region that keeps us cohesive – a unanimous and unwavering commitment to empower our people together. This solidarity will however also require the ASEAN business community to complement the efforts made by the regional authorities. Malaysia looks forward to being the chair of ASEAN in 2015 to build on the progress that has been achieved to further advance the regional financial and economic integration. This will also include the agenda of promoting ASEAN as a destination for global investments. ASEAN integration is a joint responsibility that has always been embraced. Let us demonstrate that in the case of ASEAN, the whole is greater than the sum of its parts. 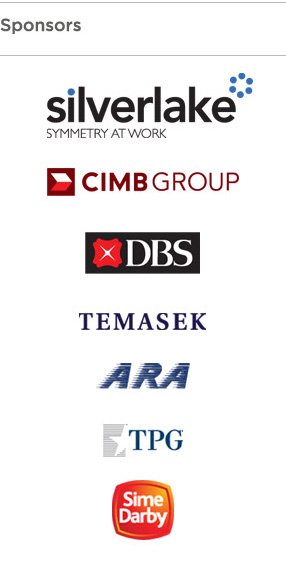